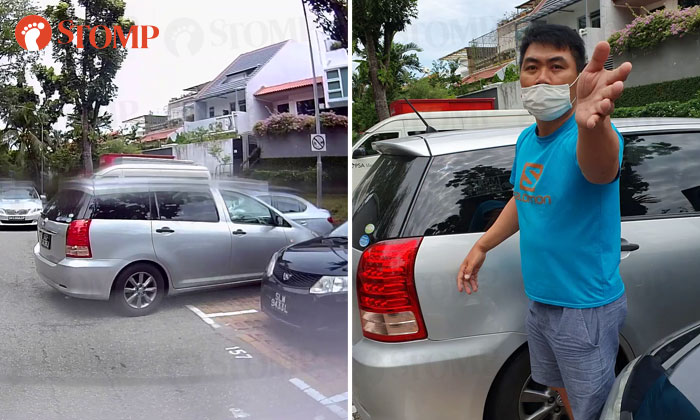 A Stomper and another driver were involved in a dispute after the driver had allegedly 'snatched' a parking lot outside Block 501 West Coast Road on April 1.

Stomper ET told Stomp that the incident happened at about 11.30am.

In videos he shared from his in-car cameras, he was seen reversing into an available lot when another car suddenly entered it.

"I had turned on my indicator lights and was reversing my car into a vacant lot at Block 501 West Coast Road when a silver Toyota Wish came in some distance away from the opposite direction to snatch the lot that I had already begun parking into, the Stomper said.

"Thankfully, I was alert and stopped reversing to avoid a collision.

"When I approached the driver since there were no other lots available, he jumped out from his car and put his face very close to mine and started taunting me even though he was not wearing a mask.

"I went back to my car to get my phone to take his picture so he went back into his car to put on his mask before coming out again to continue taunting me.

"I eventually managed to find another lot and parked my car.

"As I was retrieving the videos of him snatching the lot from my dashcam, he came over to my car and started taking my picture before shouting vulgarities and leaving."