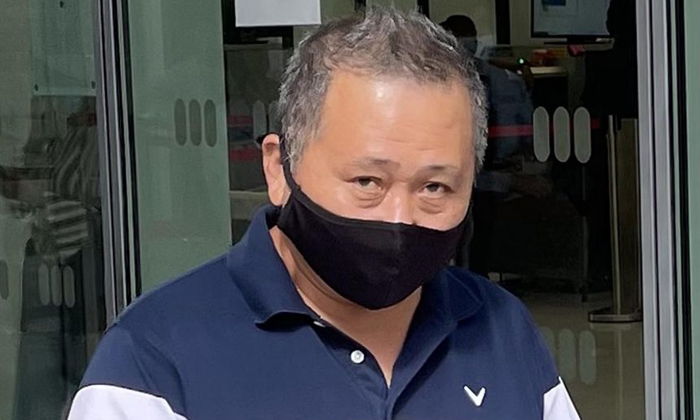 After drinking beer, Yeo Kian Heng, 57, rode his illegal personal mobility device (PMD) on a footpath and attacked a couple.

His 10-year-old son tried to stop him and begged one of the victims not to call the police.

On Thursday (March 11), Yeo pleaded guilty to one count each of voluntarily causing grievous hurt, using criminal force, and riding his banned PMD on a footpath.

At about 8.50pm on Feb 1 last year, Yeo rode his PMD on the pavement along Woodlands Avenue 7.

He had drunk two bottles of beer, and picked up his son from his sister's home.

The boy was seated in front on the PMD.

Yeo rode past a 55-year-old man and his 50-year-old wife. He told the man that it was not his father's road.

He then got off the PMD and walked angrily towards the couple.

His son tried to pull him back.

But Yeo punched the man on the jaw, causing him to fall.

As Yeo continued to rain blows on him, even stepping on his ribs and groin area, the woman called the police though the boy pleaded with her not to.

Yeo later fled on his PMD, leaving his son behind.

The boy and the woman chased after Yeo, but stopped after about 200m.

The boy again begged her not to call the police. But she told him that Yeo had to take responsibility for his actions.

While the boy and the woman were speaking, Yeo went up to them and swung his fists and kicked in the woman's direction, but she managed to dodge the blows and ran back to her husband.

Yeo then rode away again, but was later caught.

He was given seven days of hospitalisation leave.

On Thursday, Deputy Public Prosecutor Emily Koh urged the court to jail Yeo for 16 months and a day for the attack on the couple, while the Land Transport Authority prosecutor Daniel Marini asked the court to issue a fine for riding the banned PMD on a footpath.

Defence lawyer Eugene Neo pleaded for leniency for his client, and said the accused was the sole breadwinner, taking care of his three children, elderly mother and unemployed wife.

He also claimed that Yeo had been trying to snatch the phone of the male victim, who had purportedly taken photos of Yeo and his son.

"He was concerned with what would have been done with those photographs," he said.

"His sole objective was to get the victim to delete the photos."

But DPP Koh said that based on investigations, no photos were taken.

She added that the male victim had taken out his phone only after Yeo had walked angrily towards him.

District Judge Janet Wang said Yeo was the hostile party, and the attack on the male victim was sustained.

She allowed Yeo to defer serving his sentence by two weeks to make arrangements for his children to be taken care of.

For voluntarily causing grievous hurt, he could have been jailed for up to 10 years and fined.

He cannot be caned as he is above 50 years old.

Related Stories
E-scooter rider punched 60-year-old pedestrian who hurled obscene word at him in Paris Ris park
PMD rider honks at pedestrian and scolds him for not giving way: 'We must share the path'
Masked PMD rider confronts couple and accuses them of 'staring' at him at Bishan bus stop
More About:
assault
pmd
court