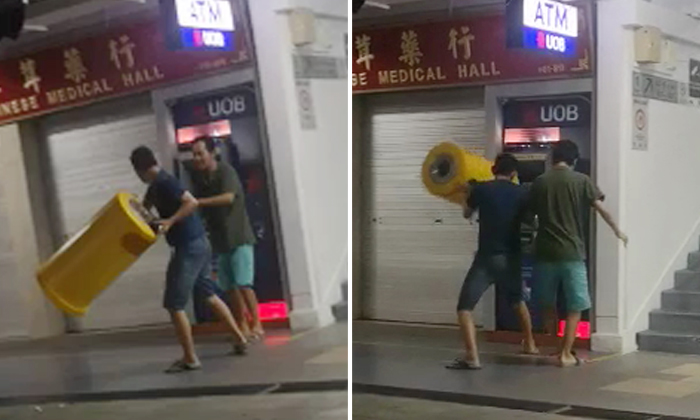 A 51-year-old man was arrested for causing annoyance to the public when drunk and using criminal force against a public servant after he was seen hitting an Automated Teller Machine (ATM) with a dustbin.

Several readers alerted Stomp to a circulated video of the incident that occurred at Block 128 Lorong 1 Toa Payoh on Monday night (Oct 19).

In the video, a man can be seen using a yellow dustbin to hit the ATM repeatedly while shouting and hurling vulgarities, as another man tried to stop him.

The latter is later seen putting back the dustbin upright in its original spot, much to the amusement of witnesses recording the video.

Both men then walk off together, with one holding onto the arm of the other. 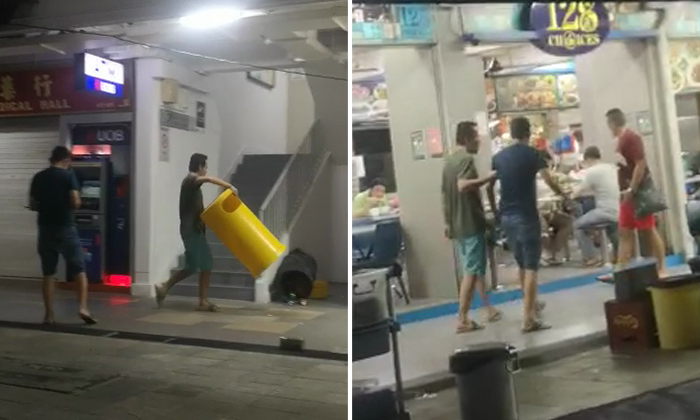 (The real MVP and the friend we all need)

Shin Min Daily News reporters visited the scene on Wednesday (Oct 21) and spoke to the 'helpful guy' who had stopped the man's antics.

Mr Cai, 43, said that the man had been drinking at the coffee shop prior to the incident. After paying for his drinks, the man walked to the ATM and staring hitting it.

"He seemed drunk so I went forward to stop him," recounted Mr Cai.

"He said that the ATM had 'eaten' his debit card and was trying to 'knock' it out of the machine by hitting it with the dustbin."

In response to Stomp queries, the police said they were alerted to a call for assistance at 9.37pm.

They added: "A 51-year-old man who reeked of alcohol was subsequently arrested for causing annoyance to the public when drunk under Section 14(2) of the Liquor Control Act and use of criminal force to deter a public servant from discharge of his duty."