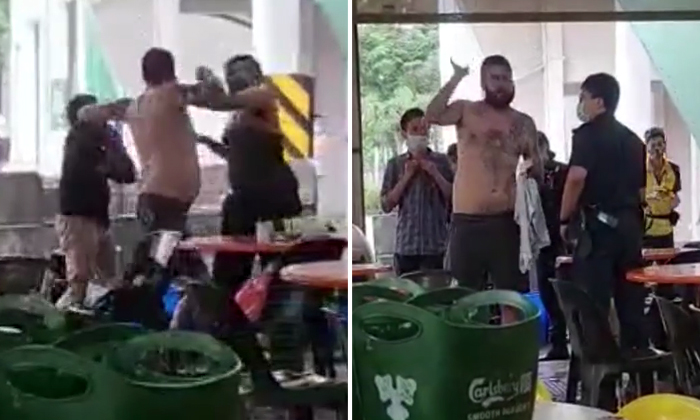 A brawl broke out between two men in a coffee shop last Wednesday, at Block 130 Jurong Gateway Road.

The police said they were alerted to a case of a rash act causing hurt at about 5.30pm, and a 40-year-old man was taken to Ng Teng Fong General Hospital.

A 10-minute video of the incident circulating online shows two men, who appear to be drunk, behaving aggressively towards each other.

A man in a white shirt can be seen challenging another man, in a black singlet, who is lying on the floor.

The man in white is seen shouting vulgarities in the video and challenging the other man to a fight, telling him to get up.

After the man in black gets up, they push and shove each other before exchanging punches.

They fall but continue to fight.

Other men can be seen trying to stop the pair but are not successful.

After the pair get up, they continue to push and shout at each other until police officers are called in.

An employee at the coffee shop, who was not named, told Shin Min Daily News on Saturday that four or five men had been sitting at the table and drinking before the fight broke out.

He said the man in the white shirt was hit by a beer bottle and was taken to the hospital.

The manager of the coffee shop, who also spoke to Shin Min, said he called the police immediately after an employee informed him of the fight.

He added that his employees will clear away beer bottles from the tables as soon as possible to prevent them from being used as weapons should a fight break out.

In the video, a coffee shop employee can be seen clearing away glasses at the surrounding tables as the fight takes place.