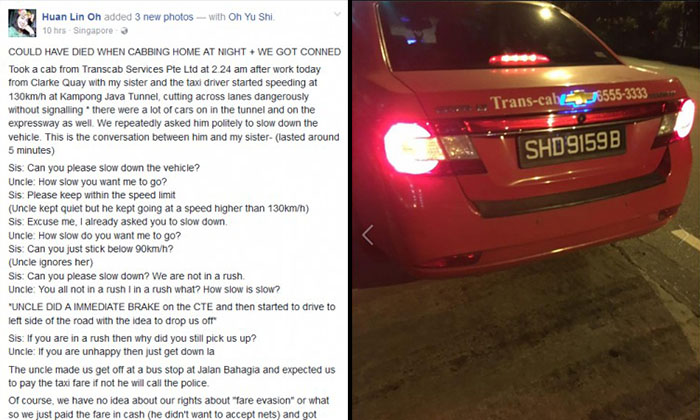 A woman took to Facebook to vent her frustrations about a cabby whom she alleges told her and her sister to get out of the taxi after they told him not to speed.

The woman, Huan Lin Oh, made a lengthy Facebook post about the incident, which she said happened at 2.24am today (Dec 25).

The woman and her sister had boarded the Transcab taxi at Clarke Quay, after which the cabby was allegedly speeding at 130km/h at the Kampong Java Tunnel.

The two women repeatedly told him to slow down, and even told him they were not in a rush.

But they allege that the cabby simply kept asking them how slow they wanted to go, and that he was in a rush.

Huan Lin Oh also said that the cabby then suddenly hit the brakes and went to the left side of the CTE with the intention of dropping them off there.

The taxi driver made them get off at a bus stop in Jalan Bahagia and expected them to pay the fine, said Huan Lin Oh.

The sisters, not knowing what else to do, paid for the fare in cash and got down to take another taxi.

They were not able to take a photo of the taxi driver's nameplate, but did get photos of the cab's licence plate number.

They also realised they had paid an additional $5 'location' charge, even though they did not board the cab at the airport or city areas.

The sisters were unable to lodge a complaint as Transcab's lines were only open from Monday to Friday, 8.30am to 6pm.

Related Stories
Taxi driver in hit-and-run claims nothing big happened even though cars are badly damaged
Socks, boots and even underwear: Taxi driver airs his dirty laundry in public... literally
Man who allegedly evaded taxi fare becomes 'buay song' after cabby thought he lives in condo -- then has the cheek to turn violent
25-year-old man arrested after acting tough with elderly taxi uncle at Woodlands St 83, then arguing with policemen
Watch this Comfort taxi driver recklessly beat a red light