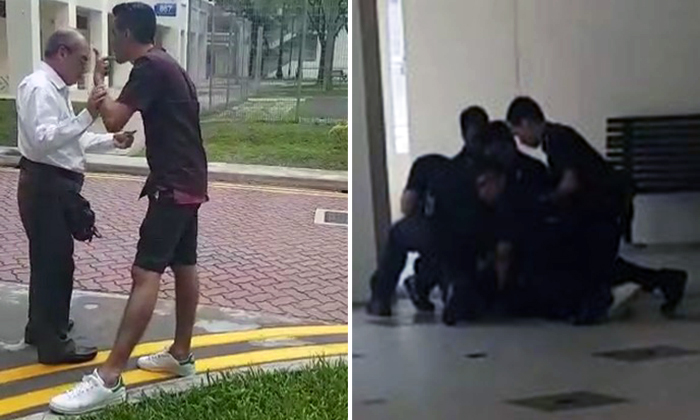 A 25-year-old man who was seen yelling vulgarities at a taxi driver and residents at Woodlands Avenue 4 was arrested by police officers at Woodlands Street 83 today (Nov 6).

In its post, Connextaxi stated that the man refused to pay his cab fare after arriving at the destination.

He allegedly only paid after police officers arrived on the scene.

The clips also show him yelling at the cabby and residents in that area.

One man, who is filming the incident, can be heard arguing with the unruly individual.

After police officers arrive on the scene, they are seen trying to tell the man to keep calm, but to no avail.

He continues yelling at and threatening residents, and even brushes of the cops who try to hold him back..

A third clip shows a group of police officers pinning the man to the ground.

A police spokesperson who responded to Stomp queries said:

"A 25-year-old man was arrested in relation to the case.

Related Stories
Rude passenger yells at cabby for not picking him up at main road even though he stated "front of block" -- and that's not the worst part
Woman yells at Singapore Post employee: 'You called me crazy!'
Man keeps yelling as he's getting arrested by police
What happened? Woman carrying child and auntie shove and yell at each other at VivoCity
What happened? Man yells at passer-by for reportedly defending busker’s choice to play music loudly at Tampines MRT station
man yells at cabby
man restrained by police
unruly
vulgar