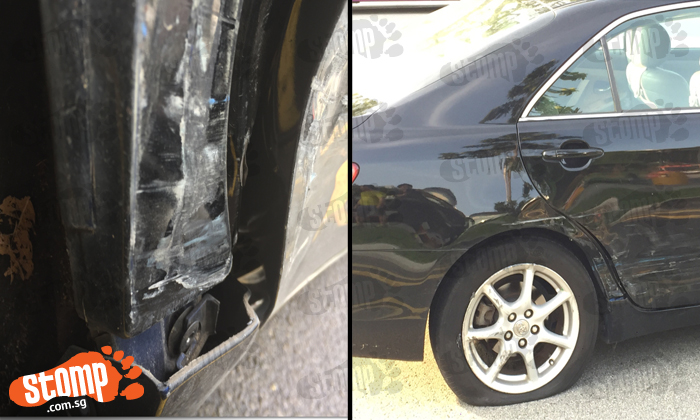 Stomper Kelvin shared with the Stomp Team about his colleague's hit-and-run encounter on Nov 20 at around 6am near Kallang MRT on Geylang Road beside Geylang Lorong 1 Bus Terminal.

"My colleague was driving towards the city and out of a sudden, a Comfort Taxi emerged out from a parking area and hit his car.

"There was a loud bang. People around turned to see what had happened.

"My colleague immediately stopped his car and alighted. However, he saw that the taxi driver had driven away."

According to Kelvin's colleague, the front of the taxi looked badly damaged, and half of its car plate was stuck in the car tyres.

"That afternoon (Nov 20), and investigation was carried out and the taxi driver was identified. However, the driver claimed that nothing big had happened," Kelvin added.

Photos in the gallery above show the damage of the Stomper's colleague's car.

"This type of driving style and philosophy of hit-and-run endangers our public.

"And not admitting the act is really not the right.

"If the taxi driver was able to free himself with all the excuses, then it really reflects that there are big lacks of road security in our public and road safety zone."

Related Stories
Have you seen this lorry driver? Look what he did to my roller shutters while reversing
Appeal for witnesses: Biker hits car at Malaysia causeway and simply speeds off
taxi
hit-and-run
damage
accident