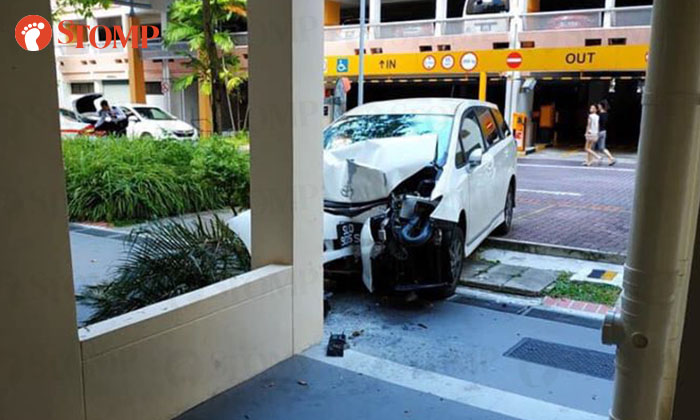 Several Stompers saw a car that had run a parking barrier down and mount a kerb at a Housing Board block in Sengkang on Tuesday (July 9) at about 7pm.

Stomper Helmi first alerted Stomp to the incident with photos showing a white car that had driven onto a kerb.

After the photo was published on Stomp's various social media platforms (Facebook, Instagram and Twitter) on Wednesday (July 10), Stomper Keith shared photos of the incident's aftermath, where a tree had fallen.

Keith's photo was subsequently published on the same platforms on Thursday (July 11).

A third Stomper, Red Ranger, told Stomp that he was about to park his motorbike there and go for dinner when he saw the scene.

He shared photos with Stomp of a carpark with its parking barrier on the ground and of the white car on a kerb.

He said: "I didn't see how it happened but when I came into the carpark, I already saw that the barrier was on the ground.

"From what I saw of the vehicle, the impact must have been quite hard and wondered what could've gone wrong in a small carpark to lead to this incident."

In response to Stomp queries, the police said: "On July 9 at about 5.27pm, the police were alerted to an accident involving a car at Block 260B Sengkang East Way.

"The driver, a 47-year-old man, was conscious when conveyed to Sengkang General Hospital.

Related Stories
Lorry hits Volvo and van after failing to stop in time for red light at River Valley Road
SBS Transit bus driver taken to hospital after crashing into road divider along Simei Road
Man suffers head injuries after accident leaves him trapped in car: "There was blood all over his body"
More About:
accident
Sengkang
police
kerb
carpark