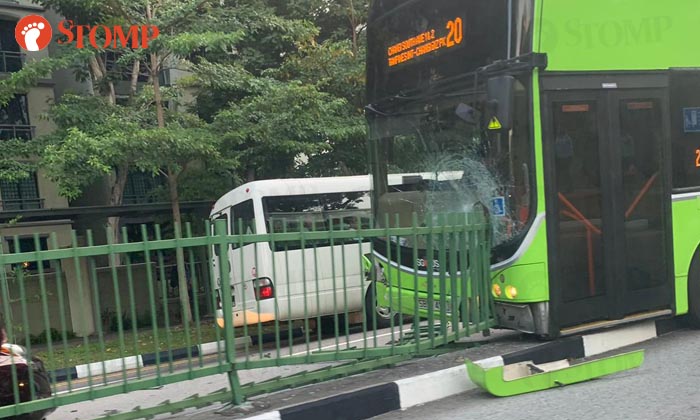 Stomper Lucas was driving along his regular route to work on Tuesday (July 9) when he saw that an SBS Transit Bus along service route 20 had crashed into a road divider along Simei Road.

Stompers Lucas and Adrian alerted Stomp to the incident with photos of the scene.

Pictures show that the bus had collided into a divider and its windscreen had shattered.

Lucas told Stomp that he saw the bus driver, who was still in the bus' driver seat, and debris all over the ground.

In response to Stomp queries, the police said they were alerted to the accident in Simei Road, towards Somapah Road at 6.33pm.

The bus driver, a 59-year-old woman, was conscious when conveyed to Changi General Hospital.

"There was an SMRT cab driver who was right in front of the bus.

"I think the cab driver was helping the situation and seemed to be communicating with the bus driver.

"There was a build up of cars. I think everyone was just stunned by the crash."

Lucas also told Stomp that he saw some uniformed personnel cleaning up the scene at about 8pm on the same day, and when he passed by the area again at 11pm, there was still a police car there.

According to The Straits Times, Ms Tammy Tan, SBS Transit's senior vice-president of corporate communication, said that the driver has since been discharged.

Ms Tan said: "We are sorry for the inconvenience caused to our passengers and motorists as a result of this incident. We are thankful that none of our passengers or fellow motorists were injured."

She also said that the operator is investigating the cause of the incident.

Related Stories
Man suffers head injuries after accident leaves him trapped in car: "There was blood all over his body"
Motorcyclist, 51, taken to hospital after skidding along Yishun Avenue 1
Motorcyclist killed and pillion rider unconscious after accident, lorry driver assisting with investigations
More About:
accident
police
Simei
SBS Transit
Bus