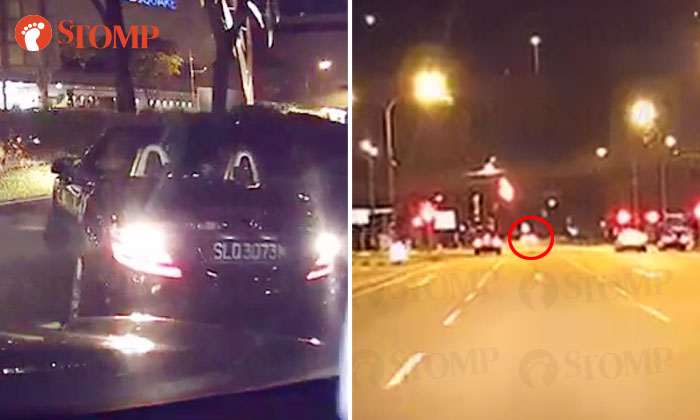 The driver of a Mercedes-Benz convertible was caught on video reversing into another car at The Pan Pacific Singapore, then speeding away yesterday (Jan 21) at around 4.15am.

Stomper Yuanquan was the driver of the rental car that was hit.

"I had just dropped off a passenger when this Mercedes suddenly reversed and hit my car," said Yuanquan, who is a Grab driver. "I was shocked when he just drove off instead of stopping."

Yuanquan then followed the car, hoping to confront the driver at a red light along Raffles Boulevard.

"The guy was obviously speeding and I did not want to match his speed," he said. "I thought I could catch up with him at the traffic light but he beat the light and I lost sight of him."

The Stomper said that a man was driving the car with licence plate number SLQ3073M and a woman was in the passenger's seat.

He added that there were dents and deep scratches on the driver's side of the rental car.

The police have confirmed with Stomp that a report was lodged and investigations are ongoing.

Related Stories
Motorcyclist and pillion rider thrown off bike after getting side-swiped by driver
Driver turns himself in to police, claims employer made him scapegoat for hit-and-run
Family of driver injured in hit-and-run on SLE appealing for witnesses
More About:
hit-and-run
accident
Mercedes-Benz
speeding
driver beats red light