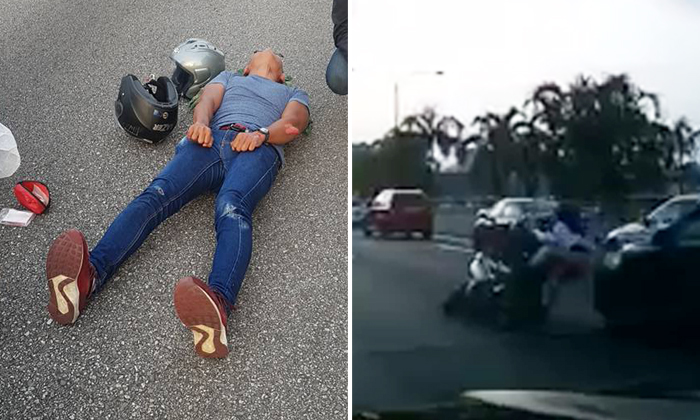 A motorcyclist and his pillion rider were flung off their bike after getting side-swiped by an Evo driver along the Pan-Island Expressway (PIE) on Dec 20.

The accident occurred before the Kallang exit, towards Tuas, at around 6.30pm.

Facebook user Mark Irrawanshah Sahetapy shared photos of the two victims lying on the road and being attended to by paramedics.

Mark told Stomp that he was one of the passing motorists who stopped to help.

According to him, the Evo driver 'chao' (meaning 'fled') after the collision and he is appealing for help in identifying the culprit.

Mark also shared a video showing the moment of impact and how the two riders were thrown of their motorcycle, which skidded to the middle lane of the road.

In response to media queries by Stomp, the police said they were alerted to the accident at 6.39pm.

The 24-year-old male motorcyclist and his 21-year-old female pillion were conscious when sent to Tan Tock Seng Hospital.

Related Stories
Biker thrown off motorcycle after getting side-swiped by car, nearly hit by truck
Injured cyclist appealing for information after hit-and-run along Admiralty Road West
Driver who knocks motorcyclist off his bike turns his back on victim -- but kudos to motorists who stopped to help
More About:
biker
motorcycle
accident
hit-and-run