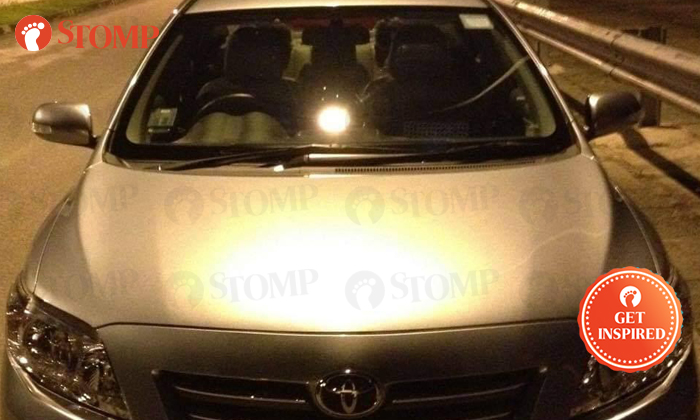 Everyday heroes live among us, as one driver who got into a traffic accident can attest to.

Stomper Shermund was driving his silver Toyota Altis when it skidded and hit a wall near along the Bukit Timah Expressway (BKE) slip road into Kranji Expressway (KJE) on Friday night (June 10).

Fellow motorists were quick to rush to his aid.

Shermund recounted: "There were around five of them: Three motorcyclists plus one car driver and one of his passengers.

"They helped me by opening my car door as it was stuck. They also gave me a foldable chair to sit on and some drinks, while helping me to contact my next-of-kin as well as the ambulance and the police.

"My chest and neck were in pain during that time and I had difficulty breathing, so I was not able to thank them at that time."

In response to a Stomp query, the police said they were alerted to an accident involving a car at 8.31pm.

They added: "The 30-year-old male driver was conscious when conveyed to the hospital. Police investigations are ongoing."

Shermund, who was taken to Ng Teng Fong General Hospital, now hopes to express his gratitude to the kind souls whom he encountered that night.

He added: "I really want to thank them from the bottom of my heart and it's best if I can thank them in person. I hope you guys are able to see this message on Stomp!

"From this incident, I believe that there are still helpful and caring people among us in time of need!"

If you are one of the five people who helped Shermund or have any info, kindly contact Stomp at stomp@stomp.com.sg or WhatsApp 9384 3761.

Related Stories
Kind stranger restores Stomper's faith in humanity after going extra mile to return husband's wallet
Kind bus captain gives mask to elderly man who forgot his, so that he could board
Woman thanks fellow cyclist 'heroes' for helping her after fall during OCBC Cycle City Ride
More About:
kind
kudos
inspiring
heartwarming
looking for
accident