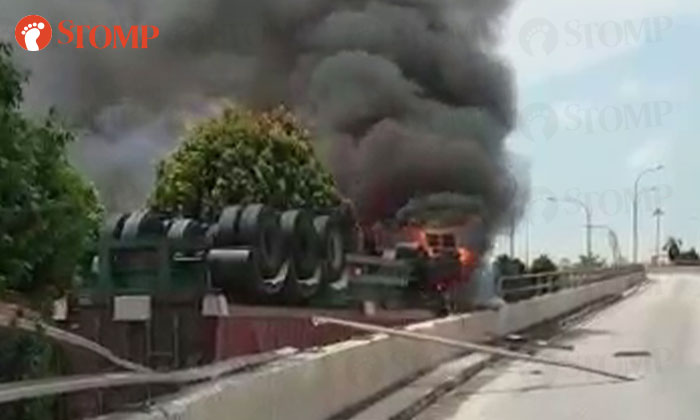 A container truck skidded, overturned and caught fire on Friday (April 1) on West Coast Highway and the 68-year-old driver was taken to hospital, the police said.

The Singapore Civil Defence Force (SCDF) said it received a call at about 11.50am, alerting it to a fire in Pasir Panjang Road, which merges with West Coast Highway.

The fire was extinguished by the SCDF using a water jet.

The police said that the driver was conscious when taken to Singapore General Hospital and the cause of the accident is under investigation.

In a video circulating on social media, black smoke can be seen billowing from an overturned container truck on the road divider between Pasir Panjang Road and West Coast Highway.

Traffic can be seen building up as a lamp post is believed to have been knocked over, blocking all three lanes of Pasir Panjang Road. Trees along the divider are also seen uprooted and burning as a result of the crash.

In the video, a commentator can be heard speaking in Malay, saying the trailer truck had overturned and a man, believed to be the driver, was sitting on the kerb and had injured his leg.

Another video, shot from a passing vehicle after the road was cleared, shows three police cars and three SCDF vehicles, including a red rhino and two fire engines, at the scene of the accident.

In the video, traffic policemen are seen at the side of the road directing traffic while firefighters are extinguishing the flames.