1 driver killed, 37 passengers taken to hospital after 2 buses in accident at Jurong junction 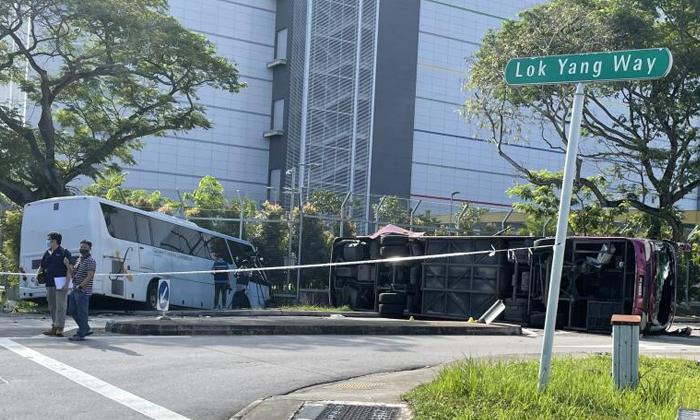 An accident involving two private buses in Jurong West on Friday morning (April 1) left one dead and 38 others injured.

In response to queries by Stomp, the police and Singapore Civil Defence Force (SCDF) said they were alerted to the accident at the junction of First Lok Yang Road and Lok Yang Way at around 6.30am.

A person was found trapped at the driver's seat of a bus, said an SCDF spokesman.

The bus driver was freed by SCDF using hydraulic rescue equipment and pronounced dead at the scene by a paramedic.

According to Shin Min Daily News, the deceased is a 73-year-old part-time driver. No passengers were onboard that factory bus at the time of the accident.

A total of 37 passengers from the second bus were conveyed conscious to Ng Teng Fong General Hospital and National University Hospital.

Their driver was also slightly injured after climbing out of the bus by himself, but reportedly sought treatment on his own after the incident.

Photos published by Shin Min show one of the buses toppled on its side at the accident scene. Police cordoned off the site for more than five hours and both buses were eventually towed away.