Doctor who beat up GF after she refused sex, left her with multiple facial fractures found guilty 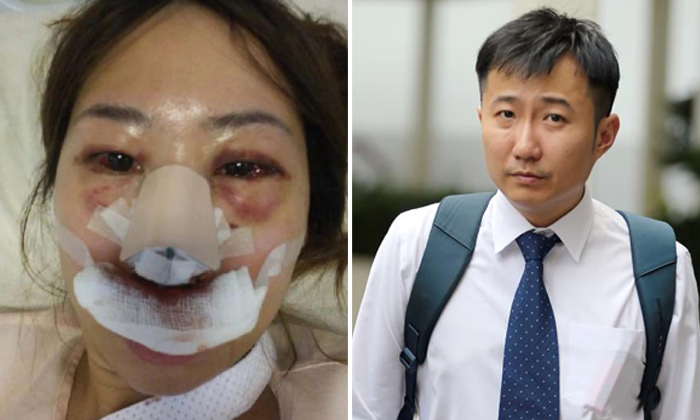 A doctor who assaulted his then girlfriend, causing multiple facial fractures, was found guilty of the offence on Monday (March 9).

A district court had earlier heard that Clarence Teo Shun Jie attacked Ms Rachel Lim En Hui, 27, at his Redhill flat between 2am and 4.12am on Aug 27, 2017, when she expressed her reluctance to have sex with him.

Teo also prevented her from leaving that morning. The couple are no longer together.

An online search reveals that he is still a medical practitioner.

Teo had told the court during the trial that he worked as a locum - or stand-in doctor - at clinics.

Following a trial, District Judge Toh Han Li found Teo, 35, guilty of one count each of causing grievous hurt to Ms Lim and wrongfully confining her.

He faces three other assault charges involving her and they are still pending.

They will be dealt with at a later date. He allegedly committed these three offences on March 12 and 30, 2017.

During the trial, Ms Lim, who worked in the communications industry, testified that she went out with Teo for a night of merrymaking on Aug 26, 2017, and returned to his home in the wee hours the next day.

The court heard that he "became enraged and turned aggressive" when she expressed reluctance to have sexual intercourse with him.

When she tried to leave his bedroom, to escape from him, he pursued her, forced her back into the room, and locked the door, the court heard. He then assaulted her.

Ms Lim had earlier said: "I was screaming at the top of my voice."

Teo's father, who lived in the flat, alerted the police at 4.12am.

Officers arrested Teo, and Ms Lim was taken to the Singapore General Hospital where she was warded for 21 days.

Teo had earlier testified that he had a drinking problem which led him to perform "inexplicable things that were quite shameful and embarrassing".

He had also said that while he recalled having sex with her in his room, his "next memory" was waking up in a cell.

He had told Judge Toh: "I recall people handcuffing me... I didn't know where I was. Someone told me I was in Police Cantonment Complex."

Defence lawyer Tan Hee Joek had said that his client suffered an alcoholic blackout that day and did not intend to commit the offences.

Judge Toh felt otherwise and said that before assaulting Ms Lim, Teo could perform acts such as driving a car and locking a door.

The judge added: "I find that the accused's ability to recall more and more events over time rather contrived, such that by the time of the trial, it was effectively only the memory of the assault which was subject to the alcoholic blackout.

"I also find that the targeted injuries on the victim's face point towards the accused's sufficient cognitive ability to aim his assault at a specific area."

The judge accepted Ms Lim evidence, describing it as "compelling".

For voluntarily causing grievous hurt, he can be jailed for up to 10 years and fined or caned.