Doctor accused of assaulting then GF over sex says he is alcoholic: "I don't remember anything" 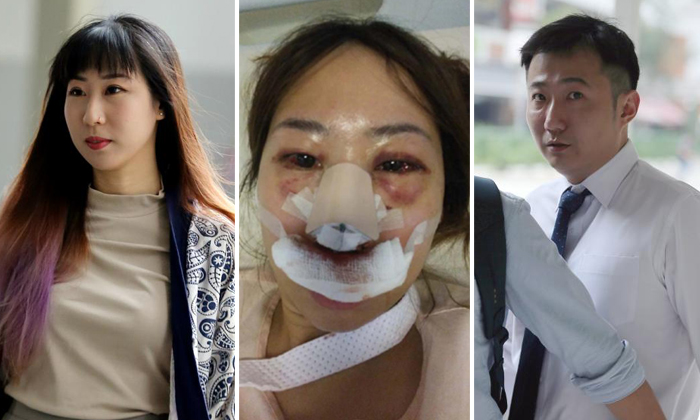 A doctor accused of assaulting his then girlfriend has told a district court that he had a drinking problem which led him to perform "inexplicable things that were quite shameful and embarrassing".

On Tuesday (Nov 5), Clarence Teo Shun Jie, 35, who works as a locum - or stand-in doctor - at clinics, testified that he had gone drinking with Ms Rachel Lim En Hui on the day of the alleged attack.

He recalled having sex when they reached his flat after the pub-hopping, but his "next memory" was waking up in a cell.

Teo testified that he later told a police officer: "I don't remember anything."

On the second day of his trial, Teo also told District Judge Toh Han Li that his drinking problem had cost him his job twice.

When examined by defence lawyer Tan Hee Joek, Teo added: "I did crazy things... I had woken up in the streets in Vietnam. I presume the bar people had thrown me out... The list goes on."

She suffered injuries including fractures to her face and left little finger.

Teo is also accused of wrongfully confining Ms Lim, 27, in his bedroom and preventing her from leaving that morning. The couple are no longer together.

Teo testified that Ms Lim had earlier told him she was suffering from bipolar disorder, and he had seen her taking medication for it.

They include anti-psychotic quetiapine, mood stabiliser lamotrigine and zopiclone - a type of sleeping pill.

Teo said: "We told each other about our mental health issues from the start... we supported each other."

The court heard that the couple went pub-hopping and had alcoholic drinks on Aug 26, 2017 before returning to his Redhill flat in the wee hours the next day.

He recalled having sex with her in his room and his "next memory" was waking up in a cell. He added: "I recall people handcuffing me... I didn't know where I was. Someone told me I was in Police Cantonment Complex."

Teo said that after he was bailed out, he went to his room and saw a bottle of zopiclone belonging to Ms Lim.

He told the court that he then "vaguely" recalled that she had offered him the medication.

But the court heard that no tests had been done on him to check for the presence of the medication in his system.

Teo added that on an earlier occasion, she had asked him to take a tablet and, according to her, he became like a "peaceful cat" after that.

He testified that once during their relationship, Ms Lim had also passed him quetiapine to "calm" him down but he ended up "raging" at her over the phone soon after.

Ms Lim, however, told the court on Monday: "Never in my life had I given Clarence medication to eat."

On Tuesday, Teo said that he had stopped drinking since October 2017 and attended Alcoholics Anonymous meetings.

He was also seeking treatment to address his drinking problem, the court heard.

If convicted of voluntarily causing grievous hurt, he can be jailed for up to 10 years and fined or caned.

Related Stories
Doctor allegedly punched girlfriend's face after she refused to have sex with him, caused facial fractures
Jobless man abused mum with obscenities after she refused to hug him, punched her fiance
Man pushed GF to the floor during dispute in Punggol flat, kicked and broke her ribs
More About:
assault
injured
doctor
couple
court