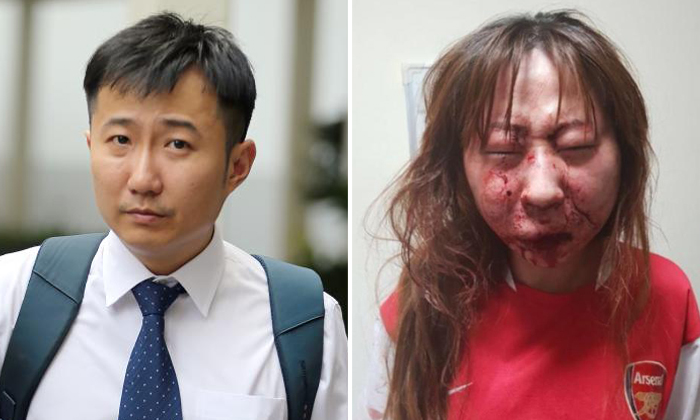 The doctor who allegedly assaulted his then girlfriend after she refused to have sex with him insisted he remembered only parts of that night, even as the prosecution accused him of fabricating his defence.

Clarence Teo Shun Jie, 35, is claiming trial to two charges - one of assaulting Ms Rachel Lim En Hui, 27, and another of wrongfully confining her in his bedroom on Aug 27, 2017.

On the third day of the trial yesterday in the State Courts, the prosecution argued that Teo had selectively chosen to remember only certain things.

Deputy Public Prosecutor April Phang said: "You recall some snippets, but you can't recall the assault... I put it to you that this break in your memory is incredible and very convenient."

She added: "You locked her in the room and punched her. It is not a random assault. You specifically targeted and punched her face. This is a deliberate and cold-blooded attack."

Teo disagreed, insisting he could not remember details, except that they had sex and argued, and then waking up in a cell.

He later vaguely remembered Ms Lim offering him zopiclone, a sleeping pill she was taking for her bipolar disorder.

He added that he found out the extent of her injuries only later, and said: "I was quite shocked and horrified."

Teo said they had gone out for dinner and drinks the night before the incident and she had also performed oral sex on him while he was driving home.

DPP Phang said that having oral sex while he was driving would have required coordination and focus.

She also argued that as a doctor, Teo would have known he should not take the medicine Ms Lim offered.

But Teo said: "When I'm intoxicated, I have very little control and I'm pretty open to suggestions."

Teo gave an example of how he had taken the anti-psychotic drug quetiapine after Ms Lim offered it to him but then raged at her over the phone.

He also claimed he had told Ms Lim he was terrified of taking sleeping pills as he already was an alcoholic.

Teo's father, Mr Teo Kim Poh, 64, who also took the stand yesterday, said he was awoken by Ms Lim's crying, which was louder the second time.

He heard an argument and said he knocked on the door and said: "Clarence, open the door, if not I will call the police."

But there was no response. He called the police after Ms Lim told him she was not all right.

According to him, Teo was lying on the bed with no response or resistance.

The older Mr Teo also said his son, when drunk, had never been violent towards him or his daughter. He would mostly keep to himself.

If found guilty of voluntarily causing grievous hurt, Teo could be jailed for up to 10 years and fined or caned.

He could be jailed for up to a year, fined a maximum $3,000, or both if convicted of wrongfully confining his ex-girlfriend.

Teo is out on bail of $15,000. The trial is expected to resume in January next year.

Related Stories
Doctor accused of assaulting then GF over sex says he is alcoholic: "I don't remember anything"
Doctor allegedly punched girlfriend's face after she refused to have sex with him, caused facial fractures
More About:
assault
couple
doctor
injured
court