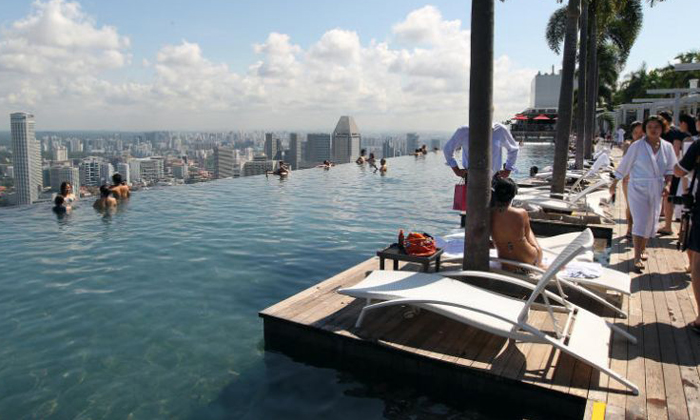 While on holiday in Singapore, an Indian doctor molested four women in the rooftop infinity pool on the 57th storey of Marina Bay Sands.

Jagdeep Singh Arora, 46, was jailed for two weeks on Thursday (July 12) after pleading guilty to two counts of molestation. Two other charges for similar offences were considered during sentencing.

The court heard that at around 9pm on June 28, a 25-year-old tourist from Lithuania was in the pool when she noticed Singh, who was with his wife.

He moved very close behind the bikini-clad Lithuanian and she felt his hand brushing against her buttock. She turned to look at him and saw his hand in the water touching her.

The woman elbowed Singh before telling her husband about the incident.

Another woman then came forward to tell the Lithuanian that Singh had molested her as well. The women then alerted security officers, the court heard.

Thirty minutes later, Singh molested a 20-year-old Korean woman who was also wearing a bikini. She was in the pool when he touched her stomach.

Deputy Public Prosecutor Mark Yeo said: "She was in a state of shock and did not know how to react. The accused then retracted his hand and walked away."

But he returned minutes later and molested the Korean woman again. He also molested her friend who was nearby.

Read the rest of the story on The Straits Times.

Related Stories
Nurse who pretended to be doctor, molested patient gets 7 months' jail
Doc accused of raping patient: But he has erectile dysfunction and is "as soft as a noodle", says wife
Saudi diplomat who restrained, groped and kissed Sentosa hotel intern gets jailed and caned
More About:
molest
court