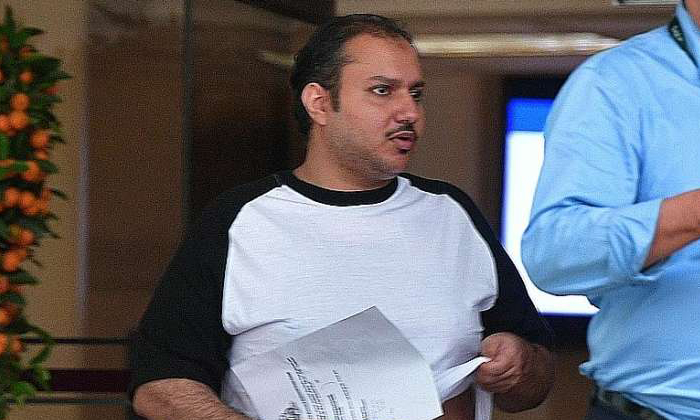 Her colleagues tried to get her to open up about being molested while on the job as a hotel intern. She refused at first but they kept on trying, even though it took hours.

District Judge Lee Poh Choo commended the staff yesterday for not giving up, as she sentenced Bander Yahya A. Alzahrani to 26 months in jail and four strokes of the cane.

The 39-year-old Saudi Arabian diplomat was also given another week in prison for using criminal force on the 20-year-old victim.

The judge said Alzahrani, a father of three, had preyed on a young, naive victim, although he still insists he is innocent and is appealing.

He was here on holiday with his family last August when he asked for a better room than the one he had been given at his hotel in Sentosa.

While he was being shown the new room by the intern, he restrained her, groped her and kissed her on the neck and face.

He also grabbed her hand and forced it against his groin.

After an eight-day trial, he was convicted of two counts of aggravated molestation and one of using criminal force.

Alzahrani had tried to convince the victim that what happened in the hotel room was their "secret" and she could not tell anyone.

It was due to the alertness of the hotel staff that the offence was uncovered and they took many hours to obtain information from the victim, the judge said.

They could have hushed up the matter in favour of their guest but did not, the judge highlighted. Instead, they called the police.

During the trial, the victim was put through the trauma of recalling and talking about the incident which had been haunting her.

She was subjected to allegations by the defence that the entire incident was fabricated, and that she was part of a conspiracy to extort money from the diplomat.

"As she said when she broke down during her testimony, 'it is very painful to remember everything in so detail'," the judge said.

The judge was not persuaded at all by Alzahrani's plea that he was a respected individual of good character and that he had acted in a moment of indiscretion and poor judgment.

Neither could she agree that the incident was brief. There were two separate episodes within 15 minutes where Alzahrani restrained the victim and molested her.

"To a victim, one minute could seem a lifetime," she said.

Deputy public prosecutors April Phang and Kenny Yang had sought 27 months and two strokes for each of the molestation charges, and two weeks' jail for using criminal force.

The defence team, led by Mr Shashi Nathan, had argued for 25 months for the molestation charges and a fine for the criminal force charge.

Mr Nathan said his client, who is with the Saudi Arabian Embassy in Beijing, still maintains his innocence.

The judge decided on 26 months and two strokes of the cane on each charge, and one week's jail for the use of criminal force.

One of the 26-month sentences will run consecutively with the one-week imprisonment, making it a total of 26 months and one week in jail plus four strokes of the cane.