Doctor 'helping with investigation' after 7 arrested, illegal medicine worth $80k seized in raids 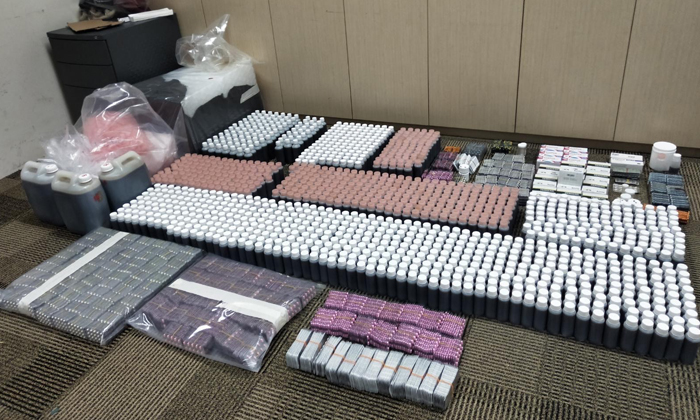 A haul of illegal medicine worth $80,000 was seized by the authorities on Tuesday (March 3) and seven suspects were arrested following raids in Geylang, Golden Mile and Chinatown.

The places raided were an office unit at Golden Mile Complex suspected to be an illegal cough syrup factory and warehouse, a coffee shop in Lorong 12 Geylang and a clinic at People's Park Complex in Chinatown.

A doctor is helping with the investigations, said the Health Sciences Authority (HSA), police, Central Narcotics Bureau and Ministry of Health in a joint statement on Thursday.

The doctor is not among those arrested and the statement did not provide details of his role.

More than 125,000ml of codeine cough syrup and 63,000 units of assorted medicines, such as cough suppressants and sleeping pills, were seized.

The operation broke up an illegal medicine supply network that the authorities have been watching for six months, the statement said.

The seven suspects, aged between 26 and 69, include one person who is also being investigated for trafficking dihydrocodeine, a Class B controlled drug under the Misuse of Drugs Act.

The HSA said that it takes a serious stand against illegal activities that would harm public health: "We will take strong enforcement actions against those who engage in the import, manufacture or supply of illegal health products."

Anyone caught importing, manufacturing, or supplying illegal health products can be imprisoned for up to two years, fined up to $50,000, or both.

The punishment for trafficking a Class B controlled drug is a minimum of three years' jail and three strokes of the cane.

Members of the public can report any activity involving illegal cough syrup to HSA on 6866-3485 or e-mail hsa_is@hsa.gov.sg.