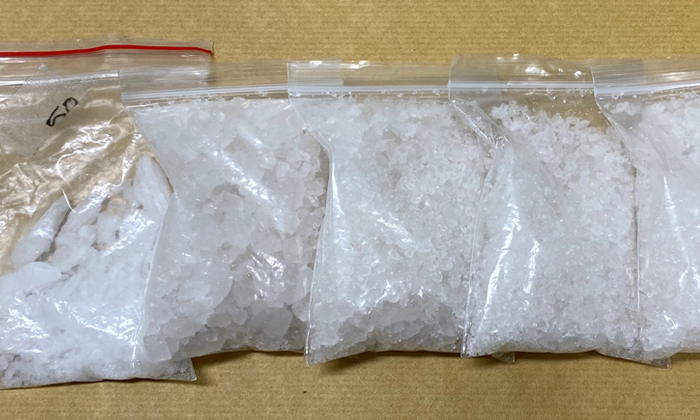 A total of 70 suspected drug offenders were arrested during an island-wide anti-drug enforcement operation conducted by the Central Narcotics Bureau (CNB) from Nov 18 to Nov 22.

"Some of the areas covered in this island-wide operation included Bedok, Choa Chu Kang, Tampines, Telok Blangah and Yishun," said the CNB in a statement on Friday (Nov 22).

According to the CNB, the 704g of 'Ice' seized is sufficient to feed the addiction of about 402 abusers for a week.

In one case on Nov 20, CNB officers arrested two suspected drug traffickers within a residential unit in the vicinity of Yishun Avenue 11.

"A total of about 100g of 'Ice', an 'Ecstasy' tablet and a small amount of green powdery substances suspected to contain controlled drugs were found within the unit," added the CNB.

Various drug paraphernalia such as a digital weighing scale and numerous drug-smoking apparatuses were also discovered in the unit.

In another case on Thursday evening (Nov 21), CNB officers tailed a Singaporean male suspect when he departed from a residential block in the vicinity of Yishun Street 81.

The CNB said: "At an opportune moment, the vehicle was intercepted along Mandai Road and the 29-year-old suspect was arrested."

Around 580g of 'Ice', a digital weighing scale and a drug-taking utensil were found.