Did you catch a glimpse of the elusive 'super blue blood moon' on Wednesday night? 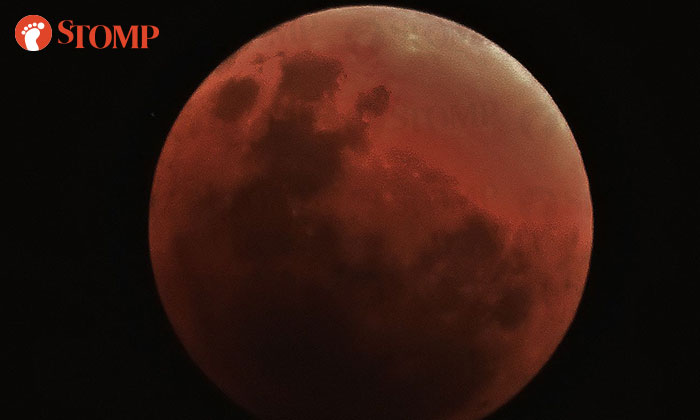 Unless you live under a rock, you would most likely notice something special in the sky on Wednesday night (Jan 31).

Many Stompers managed to catch a glimpse of the phenomenon and took photos which they sent to Stomp.

A special viewing session was held at the Science Centre Singapore from 7.30pm to 10.30pm, with an estimated 5,000 visitors turning up.

At The Observatory within the centre, visitors used one of the 11 telescopes set up to catch the rare lunar eclipse.

Many also whipped out their phones to capture the spectacular sight, especially when the full eclipse was visible at around 8.50pm.

Ms Sally Sun, 28, a mechanical engineer, was one of the visitors present.

“There was a gradient of brown to red. I've seen the blood moon in many photos, but it's amazing and meaningful to see it for yourself, as I'm a big fan of astronomy.”

Another visitor, Mr Karthik Addagarla, 30, an operations manager, said that although he had to queue for about two hours to use the telescope, it was worth the time.

“This is a rare phenomenon. Through the telescope, I could see the red moon much clearer than with the naked eye.”

The crowd included the college ’s students and their parents, along with staff and family members.

Students and teachers from other schools, such as Greenridge Primary, Northland Secondary and Kranji Secondary were also invited.

Science Centre Singapore chief executive Lim Tit Meng explained that the science behind the alluring blood moon phenomenon, saying that sunlight is composed of multiple wavelengths, and longer wavelengths such as those of a red colour are deflected and cast onto the moon during the eclipse.

He said that the shorter wavelengths are instead scattered into the atmosphere.

According to The Straits Times, the last known instance of a such an event happening — the simultaneous occurrence of a lunar eclipse, a blue moon and a supermoon — was on March 31, 1866, almost 152 years ago.

The moon enters the Earth’s shadow during a lunar eclipse.

In the case of a total lunar eclipse, the Moon takes on a red colour, and the phenomenon is known as a blood moon.

As the full moon on Wednesday night was the second full moon of the month, it was dubbed a blue moon.

However, it did not appear blue but is given the name due to its rarity, occurring once every two years and eight months.

The supermoon, on the other hand, refers to when a full moon coincides with the Moon being closest to Earth.

Related Stories
2017's first and only supermoon lights up skies
The Full Wolf Moon shone bright like a diamond in Woodlands while you were asleep
Stomper's stunning photos of the third Supermoon of 2016
More About:
moon
supermoon