Death of girl, 5, who drowned in condo pool ruled a tragic misadventure 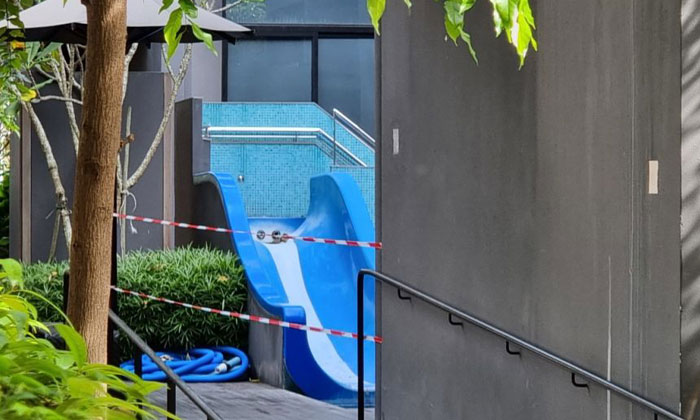 The death of a five-year-old girl who drowned when she was left alone at a swimming pool has been ruled a tragic misadventure.

Delivering the findings of the coroner's inquiry into the death of Aurelia Liu Jiabao, Coroner Kamala Ponnampalam said on Monday (Oct 18) that no foul play is suspected in the girl's death.

Her family was not in court to hear the findings.

The coroner called the incident "yet another stark reminder that children are impulsive and unpredictable".

"In the case of a swimming pool, a child may not appreciate how swiftly she may be overcome if she should inadvertently fall into the deep waters," said Coroner Kamala, who added that an attentive adult must be present to warn children and prevent an unfortunate incident.

The court heard that Aurelia had taken three swimming lessons, but her swimming instructor had earlier testified that she could not swim or balance in water.

At about 6pm on Oct 8 last year, the girl, who was 1.06m tall, and her mother, Madam Lu Ying, went to the swimming pools at their condominium, The Asana, near Farrer Road.

There was an adult couple in the 1.2m-deep swimming pool and Aurelia splashed about in the 0.8m-deep Jacuzzi while her mother watched.

At about 6.10pm, Madam Lu needed to use the toilet and told her daughter that she was going up to their flat.

Madam Lu said that she felt comfortable leaving the child alone in the pool as there were adults nearby. She did not ask them to watch the girl.

As seen on closed-circuit television footage, the couple got out of the pool about a minute after the woman left.

The footage shows Aurelia with a blue swimming board in the Jacuzzi and then walking along the edge of the pool before sitting on the shallow edge. She then lays on her stomach and tries to float.

At about 6.19pm, the girl can be seen walking towards the other side of the swimming pool holding the swimming board.

About a minute later, small movements are seen in the pool water at the front of the swimming pool. Then, the blue swimming board floats across the water and seconds later, the water is still.

Madam Lu returned to the pool at about 6.31pm and could not find her daughter. She asked the security guard for help.

At about 6.35 pm, they discovered Aurelia submerged face down at the bottom of the pool.

A resident performed cardiopulmonary resuscitation on Aurelia and an ambulance arrived soon after. Aurelia was unconscious when she was taken to KK Women's and Children's Hospital.

Her family was informed that she had a pulse but was brain dead. They removed her from ventilator support on Oct 11 last year.

An autopsy found that the cause of Aurelia's death was drowning.

The coroner concluded that the child may have had difficulty trying to float using her swimming board or slipped off the narrow ledge of the swimming pool when she was walking along its edge.

"She must have panicked and begun gulping water before sinking to the bottom of the swimming pool," added the coroner, who expressed her condolences to the family.