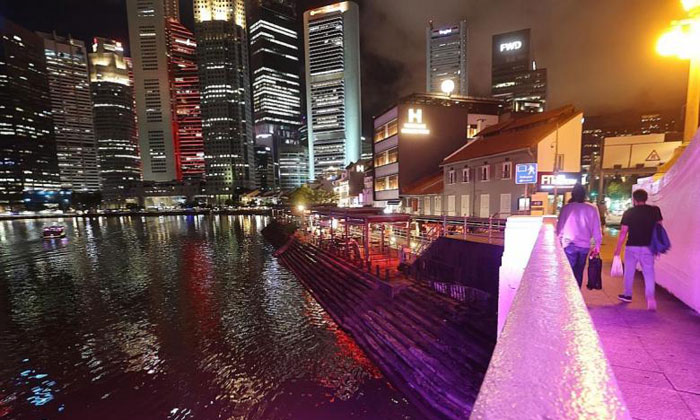 An alleged dare to swim across the Singapore River ended in tragedy on Friday last week when a man died.

Mr Khatirasan, 45, who goes by one name, is suspected to have drowned at the stretch of the river near Boat Quay.

He had apparently tried to swim the breadth of the river on Friday after allegedly taking on a dare that was issued online.

While the water seems calm on the surface, Singapore Life Saving Society president Tan Lii Chong warned that swimming in the Singapore River without setting up proper safety measures is dangerous, even for very good swimmers.

Speaking to The New Paper yesterday, Mr Tan said: "There are too many uncertainties when swimming in the Singapore River.

"The distance between the two sides of the river might be further than you think, and by the time you reach the halfway point, you might realise you are unable to continue.

"You also don't know how deep the water is - underestimating the depth could lead to panic and drowning. There also could be debris that cannot be seen and can trap you or cause other injuries."

A friend of Mr Khatirasan, who wanted to be known only as Zie, told TNP he had learnt about the dare a little over a week before the incident.

Mr Zie, a 42-year-old operations and administrative officer, said: "Someone online challenged Raysan to swim in the river at 2.30am before the end of the (lunar) seventh month, after seeing a previous post by him saying he did so in the 1990s.

"Raysan asked me to witness him doing the challenge, but I told him not to do it. I told him even though he was successful before, the circumstances could be different this time."

Mr Zie did not know his friend had gone ahead with the dare until he heard the tragic news on Saturday.

The brother and the rest of the family were too distraught to talk.

"I was so shocked when I learnt what happened. I couldn't believe someone I was talking to a few days ago died just like that, " added Mr Zie.

The 33-minute video captured Mr Khatirasan's attempt to swim the river from the moment he was about to dive in on Friday night.

At around the 4-minute 30-second mark, he could no longer be seen in the water but the camera carried on recording.

The police said it was alerted to the incident at about 8.40pm on Friday night and started investigating, while the Singapore Civil Defence Force (SCDF) said it received a call for water rescue assistance at about 11.45pm.

There was no sign of Mr Khatirasan when the officers arrived at the scene.

"Divers from the Disaster Assistance and Rescue Team (Dart) were deployed to perform an underwater search. Dart also deployed an underwater remotely operated vehicle to aid the search effort," said SCDF in a statement.

The divers subsequently retrieved a body approximately 60m from shore, at a depth of about 3m.

An SCDF paramedic pronounced Mr Kathirasan dead at the scene. A police investigation is ongoing, although no foul play is suspected.

Earlier in April, two friends drowned at the stretch of the river closer to Clarke Quay, after one of them had apparently slipped and fallen into the water, prompting the other to jump in and try to save him.

In January, the body of an 83-year-old woman was pulled out of the river.

Mr Patrick Lee, who conducts lifeguard training courses for open water and still water at Lifeguard Singapore, said there are many unknowns with the conditions in the Singapore River.

"There could be a current and those trying to swim it might not be aware. No matter how strong a swimmer you are, it can be hard to swim in unknown conditions and in a dark environment," he said.

"The recent heavy rainfall may also have made the flow of the water unpredictable."

Mr Khatirasan was a member of the Paranormal EncounterSG Facebook group that Mr Zie had founded.

The group facilitates discussion about paranormal activities in Singapore.

Mr Zie said that Mr Khatirasan, who had been working part-time prior to his death, lived alone and had a teenage daughter.

"He was a brave guy... His family and friends are devastated by what happened to him.

"I think we should not be daring people to do dangerous things online as you never know when they might actually go ahead with it."