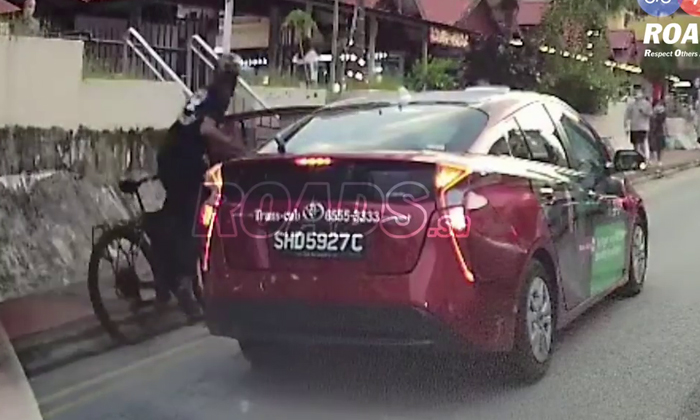 A cyclist was caught on camera crashing into an open taxi door along Balestier Road.

Facebook page Roads.sg posted a video of the incident that occurred on Monday (June 13), at around 6.40pm.

Cyclist collided into the door of the taxi as the passenger was alighting. Happened on June 13, 1839hrs at Balestier...

The cyclist can seen riding his bicycle on a pavement when he collided with the door of a taxi, which had stopped by the roadside to let a passenger alight.

The video has drawn over 101,000 views since it was uploaded on Tuesday morning, with many netizens siding the taxi driver and passenger. They were also largely unsympathetic towards the cyclist for not being alert enough.

One user commented, "Taxi already signal his hazard light, and the door was open for sometimes. Why can't the cyclist see.. pretty sure cyclist not concentrating at all."

Another added: "The taxi had hazard lights on for a long time and door was already open. It's the cyclist who didn't pay attention."

A netizen also said: "Taxi door was already opened and the cyclist rode right into it. Watch the video closely. Why cyclist had to ride so close to the narrow walkway in the first place? Why is he not paying attention or at least ride slowly?"

Related Stories
Cyclist makes rude gestures and splashes water at driver after getting honked at
Grab rider rams into pedestrian from behind, says he rang bell and she should have moved
Woman 'traumatised' and in 'great pain' after cyclist knocks her over, police investigating
More About:
cyclist
accident
taxi