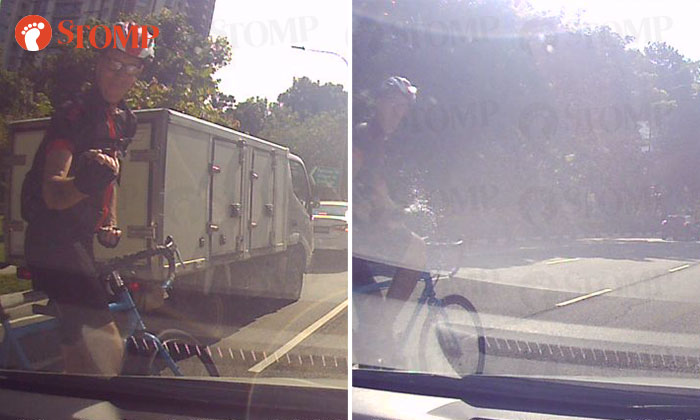 A cyclist was caught on video splashing water onto a car and making rude hand gestures at its driver after he was honked at along Napier Road on Apr 14.

A Stomper, who said he is a private-hire driver, shared with Stomp clips of him encountering the rider along Napier Road and later, Grange Road.

"The rider was ridiculously and ignorantly cycling in the second lane and drinking water at the same time," said the Stomper.

"He was putting other road users at risk.

"When I honked at him to alert him to be careful, he splashed my car with his drinking water."

"After a short distance, when I stopped my car at a junction along Grange Road to wait for a green light, this rider passed by my car, stopped in front of me and made a rude gesture at me."

Related Stories
Pedestrian argues with driver at Claymore Road: "Don't be a d**k"
Cyclist argues with pedestrian who did not give way to him along footpath: 'You got no balls?"
Driver flashes middle finger 'for no reason' along Clementi Avenue 3
More About:
road rage
cyclist
rude
hand gesture