Grab rider rams into pedestrian from behind, says he rang bell and she should have moved 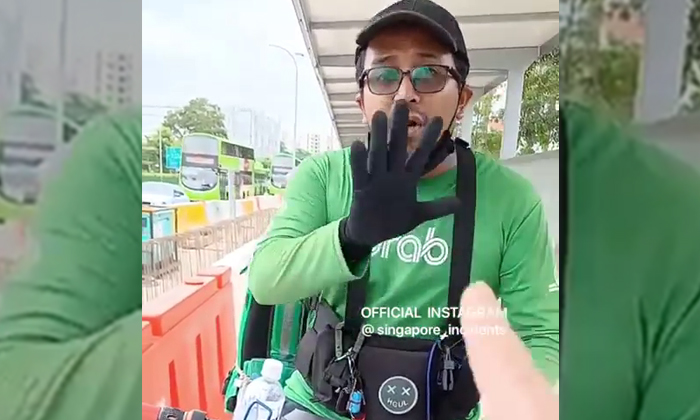 A Grab delivery rider and a pedestrian got into an argument following a collision at a sheltered walkway.

A video of their verbal spat was posted on Facebook on Sunday (Apr 10), though it is unclear when and where exactly the incident occurred.

According to the Facebook post, the Grab deliveryman had rammed into the woman from behind but remained unapologetic.

The heated exchange begins with the woman confronting the Grab rider for "banging" into her. However, the rider responds, "I already ring the bell, right?"

The woman retorts, "No, you ring bell but you cannot bang into me."

The rider then says, "But she already that side!" and the woman replies, "But I already here!"

The video ends with the man shaking his head and riding off.

Many netizens slammed the Grab rider and said ringing his bell does not mean that he was entitled to the right of way. Some also urged the woman to make a police report.

Related Stories
Woman 'traumatised' and in 'great pain' after cyclist knocks her over, police investigating
Cyclist argues with pedestrian who did not give way to him along footpath: 'You got no balls?"
Cyclist assisting with police investigations after allegedly slapping hearing-impaired pedestrian
More About:
cyclist
pmd
PMDs
grab
dispute
argument
pedestrian