Woman 'traumatised' and in 'great pain' after cyclist knocks her over, police investigating 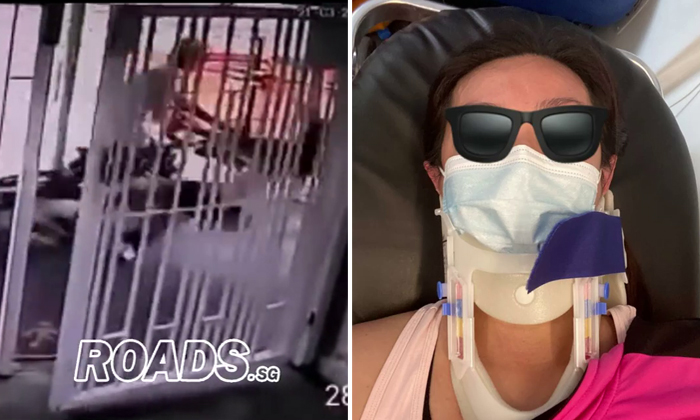 A 44-year-old woman was taken to hospital after a cyclist knocked her down along Punggol Road and has shared her harrowing account of the incident.

In response to a Stomp query, the police said they were alerted to a case of rash causing hurt on March 21, at 6.16pm. A 68-year-old man is assisting with police investigations.

Facebook page Roads.sg shared CCTV footage of the collision and the woman's recounting of events in a post on Sunday (Apr 10).

The woman, identified as Sally Ng, said she had just exited the side gate of her condominium when she was "hit and knocked down by a cyclist immediately".

Ng wrote: "The cyclist was riding at a fast speed and did not brake when he saw me. It was too fast for me to react.

"The impact was so great that I was thrown to the ground and blacked out for a few seconds. I was in great pain and could not move my body. The cyclist helped me up and I called the ambulance immediately.

"The cyclist did not apologise and was rude and arrogant. He claimed that he did not hit me and blamed me for not giving way to him. I remained silent.

"I was in tremendous shock and my entire body was shivering badly. I was unable to move my neck and felt nausea while waiting for the ambulance to arrive. My entire body was in great pain and (I was) unable to provide (a) statement to the police."

Ng said she was discharged from hospital on the same night and given five days of outpatient sick leave.

The accident left her with a neck sprain, head injury, bruises on her hip and skin abrasions, she added. She was also unable to sit or lie down for prolonged periods due to the pain from her injuries.

Ng said: "On March 23, I visited Punggol Polyclinic due to swelling (on my) left upper shoulder which was also caused by the accident.

"Three weeks after the accident, I have not fully recovered and still feel (my) upper body muscles aching very badly, especially my neck.

"I am very traumatised now, living in stress and fear of cyclists.

Reactions from netizens have been mixed. While some slammed the cyclist and said "pavements are meant for pedestrians", others also felt that the pedestrian should have kept a better lookout.

One user commented: "Both vulnerable, both at fault. One need to slow down the other need to stop and look."

However, another netizen pointed out: "Look right first. That’s almost instinctive in us from young. She was doing that and when she was about to look left, there came the cyclist who to all intent and purpose should have full view and control, therefore must slow down, stop, raise alarm etc."

Related Stories
Cyclist argues with pedestrian who did not give way to him along footpath: 'You got no balls?"
Cyclist assisting with police investigations after allegedly slapping hearing-impaired pedestrian
Cyclist confronts car driver who allegedly honked at him for cycling in middle of road
More About:
accident
cyclist
pedestrian
injured