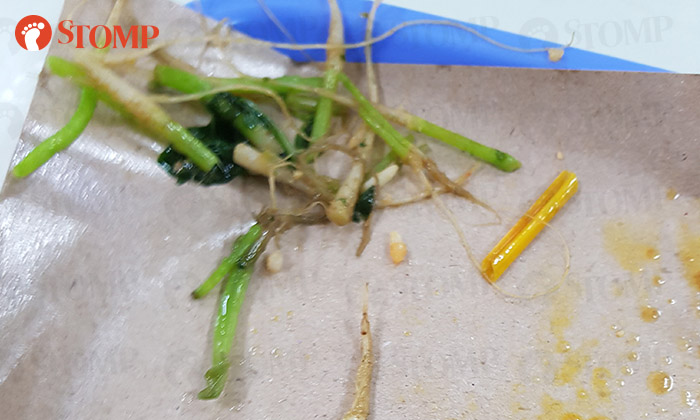 A customer was disgusted after she finding plenty of vegetable roots in a plate of economic rice she ordered from a coffee shop at Block 107 Hougang Avenue 1.

Stomper Mary visited the coffee shop on Dec 14, 2019 for dinner at about 6pm when she encountered this disgusting experience.

She contributed photos of the incident and told Stomp: "I went to order my usual few dishes from the same stall and noticed that the staff was a different group of people. There were some different dishes too.

"I asked them about it and the man who attended to me said that they had taken over the stall from the previous owner.

"After a few spoonfuls, I noticed some roots. I thought there was just one or two of them, so I put them on one side of the plate.

"As I ate more, I realised that there were a lot, so I took pictures.

"I took the plate and brought it back to the stall but he didn't apologise or offer to give me a new plate of food.

"The staffer only said he'll inform his boss about this.

"I think they accidentally mixed the roots with the vegetables and maybe I got the serving with a whole cluster of them.

"I've eaten there about two to three times but this is the first time I'm encountering this from this stall.

"It's rather cheap, only cost about $2.30 for rice, one vegetable dish and one meat dish, but I've lost confidence in their food."

Related Stories
Punggol resident forced to close windows due to human poo at staircase landing
Man concerned for pregnant wife after she bites on "plastic" while eating at Yishun coffee shop
Driver throws litter out of car and spits onto road at Serangoon
More About:
food
Hougang
disgusting