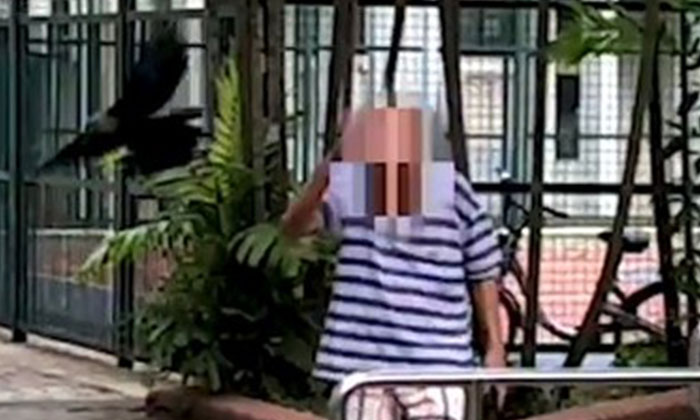 At least 30 residents at Toa Payoh North came under attack by a flock of vicious crows within two hours.

Recently, the crows have become aggressive and flocks would often dive-bomb at passersby.

Ms Xu said that her son was returning home after playing basketball at a court nearby where he felt a gust of wind.

To his surprise, a crow dived down, narrowly missing his head.

She said: "He wasn’t really hurt, but was quite traumatised by the event."

Ms Xu who observed the crows from her flat’s window for an hour on Wednesday afternoon (Feb 7), revealed that within the span of two hours, crows flew alarmingly close to 30 peoples’ heads or even pecked at them, she said.

According to Ms Xu, although there is a sign warning the public that feeding the birds was prohibited, many continue to throw food items such as bread from their flat.

This led to the crows amassing in the area to forage for food.

Footage provided by Ms Xu showed a crow diving at an elderly man.

The crow even used its talons to grip the man’s hair before flying away.

The elderly man looked shocked, as he tried to shield himself from the aerial assault using his hands.

In response to media queries, an Agri-Food and Veterinary Authority of Singapore (AVA) spokesman said that it has dispatched personnel to chase away the birds and remove the nests.

An advisory on AVA’s website reads that the birds may attack people during the fledging season when the young are learning to fly.

Crows are intelligent creatures and the adults are fiercely protective of their young.

They may attack if people go too close to their young, viewing it as an invasion of territory or a threat.

Other than that, the crows are also noted to be grudge-holding birds and people may be attacked if they accidentally offended one of their kind.

It advised residents to dispose of their food wastes appropriately so that the birds would not have a chance to forage for food.

During a crow attack, one should flee quickly and look for a sheltered area, or use an umbrella to hold off the angry birds.

The AVA also encouraged members of the public to call its hotline at 1800-476-1600 if they are attacked by crows or know of any such incidents.

Related Stories
Man injured after running into wild boars while picking durians at Rifle Range Rd
Woman worries about rabies after being bitten by neighbour's dog, owner refuses to pay medical bills
French girl, 5, bitten by otter that suddenly 'jumped out' of water at Gardens by the Bay
More About:
crows
animal attack
AVA
animals