Woman worries about rabies after being bitten by neighbour's dog, owner refuses to pay medical bills 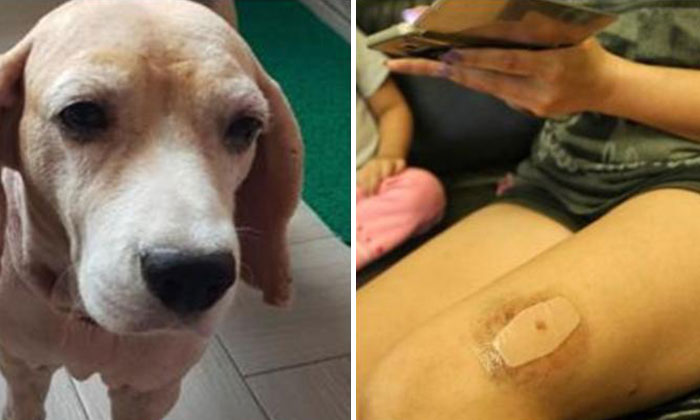 Stomper Ng was bitten by her neighbour’s dog but the owner has refused to pay her medical bills, or even place a muzzle on his pet as requested by the victim.

Ng told Stomp in a phone interview that she was on her way to buy dinner for her family, and had just stepped out from her house when she saw her neighbour and his dog at the corridor.

“I didn’t think much of it. The dog was already unleashed before he reached his home.

"Then the dog suddenly ran towards me.

“It bit me on my left leg when I was locking my gate.”

Ng said that at the moment, ‘pain permeated’ throughout her body and she was bleeding profusely.

According to Ng, her neighbour simply gave a note of surprise, ‘Oh my god’, before getting his dog back, and dragging it back into his house.

At the time, Ng could not confront the neighbour, as she had to rush home to apply a plaster on the wound.

She then left for Mount Alvernia Hospital for an examination of the wound.

Ng said that the doctor gave her a shot for tetanus, and applied disinfectant on her wounds.

However, the dog’s saliva had seeped into her wound, and she is worried that she may contract rabies.

The doctor advised her to get a rabies jab at Tan Tock Seng Hospital as he was unsure if the dog could be a carrier for the virus.

When Ng went to Tan Tock Seng Hospital for the jab, she was told that it would be unsafe, and she had to forgo the shot.

She revealed that the wound has been continually bleeding the past few days, restricting her mobility.

She added that she would have fevers due to infection from the wound.

Even worst, the attack has left her traumatised and Ng said that she will scan the corridor for dogs before going out.

Ng understands that the dog is a mixed-breed beagle, and has been with her neighbour for nearly six years:

“That dog is very aggressive towards strangers, and even late at nights, you can hear it barking.

"The height which the dog bit me was at the height of my two-year-old daughter's neck.

"There will be children walking on the corridor.

"He (the neighbour) cannot even guarantee that the dog will not go onto the corridor."

After the incident, Ng tried to solicit her medical bills from the neighbour and his father and suggested for them to send the dog away.

"They started asking me if I was covered by any insurance company for the medical expenses and simply brushed off the topics of medical compensation.

“They did not even have the responsibility to put on a muzzle for their dog, and even told me that it was impossible to send the dog away.

“They also spread rumours that I set dogs on them.

“This is totally unreasonable.

"I called the AVA on Saturday."

When reporters from Lianhe Wanbao spoke to the neighbour to find out more, he described the fiasco as an ‘unfortunate incident’.

He added that his dog has never bitten anyone before, and he was unsure why it had suddenly acted the way it did.

He also added that the police are investigating the matter, and declined to comment further.

In response to media queries, the police have confirmed the incident.

Related Stories
French girl, 5, bitten by otter that suddenly 'jumped out' of water at Gardens by the Bay
Police shoot wild boar after it goes on rampage at Punggol
Wild boar that attacked man at 25 Hillview Ave dies after getting hit by bus
More About:
dog
animal attack
neighbour
dispute