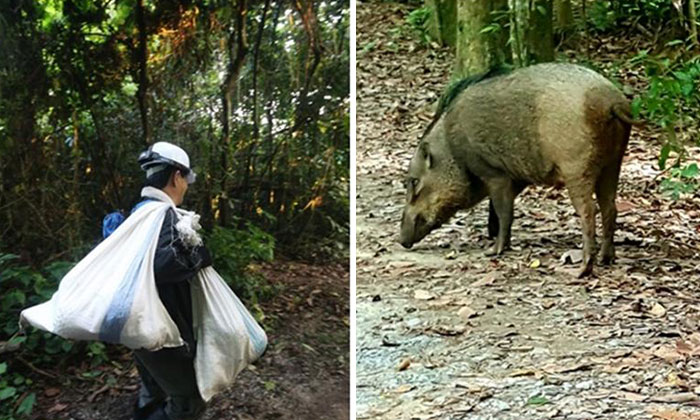 A man fell and injured himself after encountering wild boars while picking durians in a forested area at Rifle Range Road.

The durian trees at Rifle Range Road has seen a fruitful harvesting season recently, causing almost a hundred people to visit the place for free durians each day.

However, some members of the public have commented online saying that they were stopped by officers from National Parks Board (NParks), questioning whether it was indeed legal to pick the durians.

In response to the comments, NParks said that in accordance with the Parks and Trees Act, the public cannot pick or harvest any samples from parks, nature reserves, and areas under NParks.

This includes durians from the wild durian trees.

A spokesman also warned about the dangers of going into the forested areas and getting lost.

He said that since the durian harvesting season, there has been an increase in the number of reported injuries.

Furthermore, he added, people can run into dangerous animals such as snakes and wild boars.

In a recent case, a man was picking durians when he encountered wild boars,

He quickly left but fell and injured himself during the process.

According to Lianhe Wanbao, the man had ventured deep into the forest by himself to pick durians, and heard the calls from wild boars while he was searching for durian trees.

Worried that he might be attacked, he quickly ran but tripped and fell.

He was later conveyed to a hospital for treatment and later recounted his experience to NParks officers.