Crow culling at Desker Road: NParks was alerted to crow attacks in the area 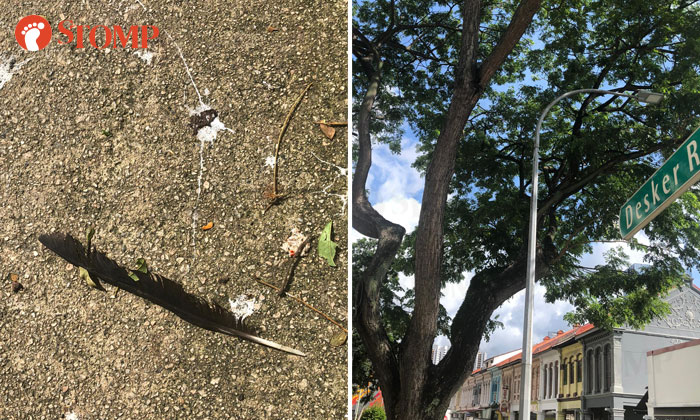 The National Parks Board (NParks) told Stomp that a recent crow culling exercise at Desker Road came after they were alerted to crow attacks in the area.

Stomper Anonymous alerted Stomp to the culling exercise near Block 642 Desker Road on Tuesday (May 12) at about 9am.

"I couldn't believe my eyes when I saw them picking up the dead crows and still looking up at the trees for more."

The incident concerned the Stomper who felt this was a form of animal cruelty.

"Friends told me that the crows may spread disease and maybe it was because residents complained but those are still lives."

She added that she did not have her phone with her at the time but later returned to the scene and took photos of crow feathers on the ground.

Mr How Choon Beng, director of NParks, clarified with Stomp that house crows (or Corvus splendens) are not native and are an invasive species in Singapore.

"Management of invasive bird species requires a holistic and science-based approach, incorporating the removal of food sources, habitat modification, population control strategies such as culling, and studies to understand the population ecology of the birds such as their roosting patterns and movements," he said.

"NParks was alerted to crow attacks in the area.

"Due to public safety concerns, urgent actions were required.

"We surveyed the area and found that the most feasible approach was to remove the crows and their nests.

"The removal of the nests will make the crows less territorial and minimise attacks."

Mr How added that such removal operations are strictly regulated and are only carried out by trained Auxiliary Police Officers (APO).

"Teams carrying out such work include safety officers and safety assessments are always carried out beforehand to ensure that they are a safe distance away from and are not facing buildings and people," he said.

"Hence we advise the public to avoid picking up crow fledglings that may have fallen from the nests, as they might be mistaken for predators.

"At the same time, the public can help to mitigate the birds’ population growth and congregation by not feeding them and disposing of food scraps properly.

"This is also to safeguard public health.

"Leftover food may attract other pests, like rats, that carry diseases and pose a risk to public health."