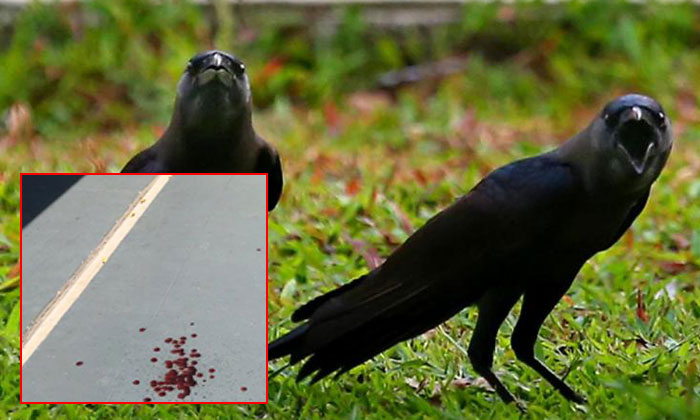 The birds targeted the woman's head, and by the time the crows were done, she had to be rushed to Changi General Hospital (CGH).

The Singapore Civil Defence Force told The New Paper it was alerted to the incident at Block 106, Pasir Ris Street 12, on Tuesday at 7.10pm.

A woman in her late 40s was taken to CGH in an ambulance with lacerations on her forehead.

Yesterday, the woman who heard the scream said: "My daughter told me she saw three or four children feeding crows.

"The crows flew around and attacked a woman. There was a lot of blood on the woman's head. The blood had splattered on the ground and she was screaming."

The woman was not the only one attacked that day.

Civil servant Ian Ng, 41, and his parents were also attacked by crows in the vicinity while on their way to a night market.

He said: "I saw a baby crow lying on the ground and four or five big crows perched on shelters and lamp posts. The crows swooped down when people walked into the area. A crow went for my head. I got a shock."

Fortunately, they did not suffer serious injuries. Mr Ng was attacked once while his 77-year-old father was attacked twice.

The younger Mr Ng said: "The crows attacked us with their beaks, but luckily it was not painful."

He then called the Agri-Food and Veterinary Authority of Singapore (AVA).

Residents told TNP they heard what they thought was the sound of shooting yesterday morning and believed it could have been the authorities conducting a culling exercise.

One crow's nest was removed.

AVA said: "We will continue to monitor the situation, and conduct surveillance and operations within the area.

"The public can do their part by not feeding the birds and ensuring proper food waste disposal. Easily available food sources will encourage the birds to congregate and result in an increase in their numbers, which could result in related nuisance and hygiene issues."

When TNP visited the area yesterday morning, bloodstains were found at the void deck of Block 105.

No crows were spotted.

Mr Chong Joo Chong, 63, a Block 103 resident, said he was attacked by a crow yesterday afternoon.

He told TNP: "A huge crow went for my head thrice. It was aggressive. I saw another man being attacked by two big crows and a small one.

"It felt like someone was pushing my head with a lot of force."