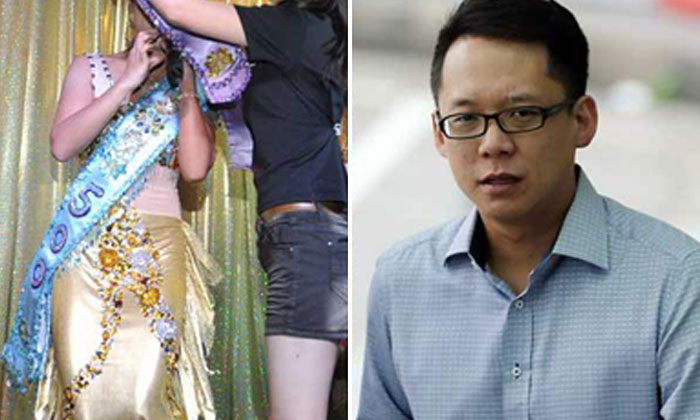 He found the credit card in his father's laundry shop.

Despite knowing it belonged to his father's customer, Cheng Liqin, 34, swiped it and went on a spending spree.

His biggest expense: Splurging $12,000 on a Thai club hostess in order to "buy her out" of her workplace.

His wild and illegal spending spree was finally brought to an end when he tried to buy a $29,500 watch using the United Overseas Bank (UOB) credit card, and the purchase was rejected.

He had pleaded guilty to eight charges, with 13 others taken into consideration for sentencing.

He spotted it in a small container at his father's workstation and guessed that the customer must have left it in clothing that was sent for cleaning.

Cheng decided to use it for his own expenses.

He first misused the credit card two days later at Club Aura, at Orchard Hotel, spending $925 on flower garlands and tips for hostesses.

He returned the next day and met a Thai hostess who asked if he could "buy her out".

This meant he had to spend a certain amount at the club so she would no longer have to work for it.

Cheng agreed, and used the stolen credit card to buy $12,000 worth of flower garlands that night.

Over the next week, he used the credit card to pay for drinks at other clubs, including those at Tras Street and Peace Centre, and meals at restaurants.

He was finally exposed when he went to a watch shop at Golden Landmark Shopping Complex and attempted to buy an Audemars Piguet watch that cost $29,500.

The transaction failed, and UOB called the shop to inform the sales assistant that the credit card had been stolen.

The police were called and arrested Cheng at the shop.

Court papers said Cheng has since paid back the money he spent.

He could have been jailed for up to five years and/or fined for each charge of cheating by personation.

For dishonestly misappropriating the credit card, he could have been jailed up to two years and fined.

He could also have been jailed up to five years and fined for the attempted cheating charge.