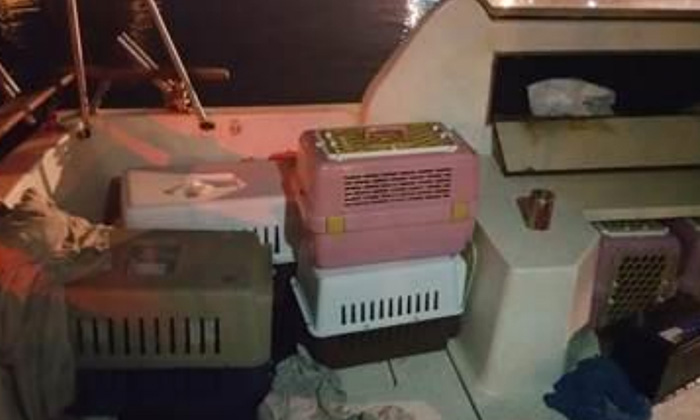 According to the Agri-Food & Veterinary Authority (AVA), Cheow informed the court that he intended to appeal. His case will be mentioned again on 18 January 2017.

On Oct 28, at about 4.17pm, Police Coast Guard (PCG) officers approached a Singapore-registered yacht for routine inspection while patrolling at the sea off Changi General Purposes Anchorage.

During the inspection, PCG officers discovered 23 live puppies on board the yacht belonging to Cheow. The men did not have an AVA import permit or health certificate for the puppies.

23 puppies, comprising of 9 Poodles, 5 Shih Tzus, 4 Pomeranians, 3 French Bulldogs, and 2 golden retrievers were kept in cramped conditions in 6 pet carriers, which were concealed under bath towels.

The two men and the puppies were referred to AVA for investigation.

The investigation found that no food and water were provided during the transportation. Some of the puppies showed clinical signs of lethargy, inappetence and diarrhoea.

The puppies’ condition did not improve despite veterinary treatment.

11 of the puppies’ condition deteriorated, and subsequently, succumbed to illnesses and died.

While the case was under investigation, the 12 surviving puppies were cared for and quarantined at AVA’s Sembawang Animal Quarantine Station (SAQS).

They were observed for signs of infectious or contagious diseases, especially rabies, a disease which is fatal to animals and humans.

Animals that are smuggled into Singapore are of unknown health status. In the case of dogs and cats, the foremost concern is rabies, which can be transmitted to humans by the bite of a rabid animal.

Singapore has been free from rabies for over 60 years, but Singaporeans cannot be complacent as the disease is endemic in the region.

To import an animal into Singapore, the animal needs to meet AVA’s import conditions, including vaccination and health certification requirements.

Depending on the country of export, certain animals have to undergo post-arrival quarantine at SAQS.

During quarantine, AVA officers will monitor the health of these animals closely to ensure that they are free from diseases, including rabies, before being released from quarantine.

AVA’s rigorous system of quarantine and health checks on imported animals mitigates the risk of exotic animal diseases, such as rabies, from entering Singapore.

The importation of any animals without an AVA permit is illegal and carries a maximum penalty of $10,000 and/or imprisonment of up to one year.

The AVA would like to remind travellers against bringing live animals, birds and insects into Singapore without a proper permit.

The public can refer to AVA’s website or download AVA’s mobile app, SG TravelKaki (available free-of-charge from iTunes and the Google Play store), for more information on bringing back animals from overseas travels.