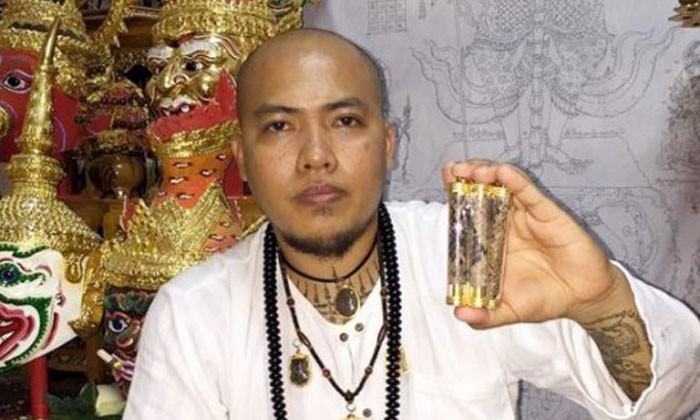 Using the name Arjan Pheimrung Wanchanna, he displays for sale items such as snake and animal skin amulets, little monkey skulls, crocodile heads and other charms.

This man is one of the many Thai Arjans, or spiritual masters, who visit Singapore regularly to perform blessings and spiritual tattooing.

However, his use of animal parts in amulets has put him in the crosshairs of counter-trafficking organisation, Global Eye.

What was even more shocking was Arjan Pheim's offer of more powerful charms.

In an exclusive interview, Global Eye operatives told The New Paper that Arjan Pheim had claimed that he could smuggle human foetuses, dead tiger cubs and adult skull fragments into Singapore.

Posing as interested buyers, the operatives met the Thai in a hotel room at Joo Chiat Road in March this year.

They secretly recorded the meeting, during which Arjan Pheim said in Thai: "I can guarantee. I have shipped (contraband wildlife and human parts) to Singapore, Malaysia, Taiwan and China."

He also showed them pictures of his illegal merchandise on his mobile phone (which has been reproduced in a TNP video clip).

He also had images of a wet-looking tiger cub in a translucent pail and what looked to be a complete leopard skin.

More disturbing were pictures of a dried human-like foetus with the eyes and tiny fingers clearly visible. He later showed other samples of "ready-to-sell" foetuses wrapped in gold leaf.

The trafficking of wildlife and the smuggling of human parts are illegal in Singapore.

Mr Kearney said: "The Arjans kill and mutilate beautiful animals in the name of spiritual benefit, and how the drying of human beings benefits our collective spiritual well-being is something I can never understand.

"I imagine many Singaporeans would be deeply disturbed to know that these Arjans are entering their country and selling these items."

TNP learnt of Arjan Pheim's visits to Singapore late last year. Our investigations revealed that some Singaporeans and local amulet shops had promoted his illicit merchandise on their Facebook and Carousell pages.

We also found posts offering to sell dried female genitalia, or what is known as Yoni, and oil purportedly made from a female corpse.

TNP alerted the Singapore authorities, as well as Global Eye when other visiting Arjans were also found to be touting similar banned charms.

Arjan Pheim even told the undercover operatives that his products are illegal in both Thailand and Singapore.

Describing how he would smuggle a dead tiger cub into Singapore, he said: "You pack it with toys. It's all right. Lukok size is small. Not big size."

The operatives left the meeting with samples of animal skin amulets.

In Thailand, the use of human foetuses for occult purposes is not uncommon, a senior police officer in Chiang Mai told TNP during a telephone interview in June.

Major-General Pacha Rattanapan said he once investigated a case of four dead foetuses found near a temple in 2015 following the arrest of a man.

He said that the foetuses were usually acquired from abortion clinics, adding: "After a woman has an abortion, the remainder (foetus) is then thrown away, and there are people who will purchase them to make Kuman Thongs (child spirits)."

He said the trading of foetuses is "illegal under Thai laws" because it is similar to concealing a corpse and not declaring a death.

The chief abbot of a Thai temple in Singapore said the Arjans' activities are not related to Buddhism.

Said Phrakhru Udom of Uttamayanmuni Buddhist Temple in Choa Chu Kang: "Arjans are not part of the Buddhist Sangha (community). Nowadays, there are a lot of cari makan (Malay for profiteering) Arjans."

Mr Ricardo Choo, who authored The Spirit & Voodoo World of Thailand in 2011, said Arjans come to Singapore because there is a lucrative market.

TNP understands that during his time in Singapore, Arjan Pheim was preparing four dead tiger cubs to be sold as "good luck charms".

He did not respond to TNP's request for an interview.

Smuggling in human parts is against the law

It is illegal to smuggle human parts into Singapore.

Shipping restrictions exist for human remains, including ashes, which have been classified as prohibited items for import into Singapore, said the Singapore Post website.

A permit is required from the National Environment Agency to transfer human remains from overseas to Singapore for cremation or burial.

But Arjan Pheimrung Wanchanna's purpose for bringing human parts here is not for burial - they are to be used as powerful charms.

He admitted to previously smuggling amulets made from protected wildlife and human parts like foetuses and skull bones into the region, including Singapore.

He said: "There is a dearth of cases relating specifically to the smuggling and sale of human body parts, but this has been addressed in the Human Biomedical Research Act 2015, which prohibits the commercial trading of human tissue under Section 32.

"Nevertheless, the buying or selling of human organs or human blood is currently prohibited under section 14 of the Human Organ Transplant Act (Hota)."

The snake and supposed "tiger" skin amulets, which Arjan Pheim gave to the two undercover operatives from Global Eye, were surrendered to the Lee Kong Chian Natural History Museum at the National University of Singapore.

Tests showed that the skin samples were from a leopard cat and a reticulated python. Both are protected species.

Anyone found possessing, selling or advertising endangered species which have been imported without a permit faces a fine of up to $50,000 per specimen (with a maximum of $500,000) and/or a jail sentence of up to two years.

The same penalties apply if netizens are caught advertising or selling illegal wildlife - whether real or fake - on the Internet.

What Arjan Pheim said about his amulets

Tiger gives you more authority or leadership. Small or big (amulet), it's the same.

I can guarantee. I have shipped (contraband wildlife and human parts) to Singapore, Malaysia, Taiwan and China.

On how long it takes to  process and deliver a tiger lukok,  or encased tiger cub:

From the time I get the tiger, seven days later, I (ship) it out.

Referring to the amulets he had brought in from Chiang Mai, Thailand:

This one (snake and tiger amulet) is also illegal here.

Related Stories
'Scary' amulet with 3 skulls sold on Carousell apparently blesses you with wealth
Ad for creepy amulet that supposedly "protects" its owner and brings success totally freaks out online shopper
Would you buy this? Creepy $800 ‘personal genie’ on sale on Carousell
More About:
scary
smuggle
amulet
human foetuses