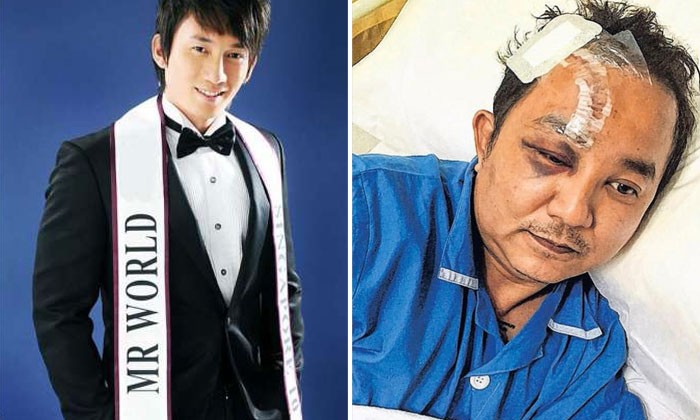 The man who clinched the Mr Singapore World 2010 title was jailed for three months on Wednesday (Feb 1) after pleading guilty to causing grievous hurt to a taxi driver by performing a rash act.

The pair had earlier consumed alcoholic drinks at a birthday celebration and Mr Lee was directed to drive to Jurong West Street 64.

While the taxi was travelling along the Ayer Rajah Expressway, the two drunk men vomited into plastic bags the cabby had given them.

Hu alighted without paying and went up a flight of stairs at the block. Mr Tay stepped outside and sat on a nearby bench.

He still refused to pay the fare when the cabby asked for it.

He then tried to stop Hu and Mr Tay from taking a lift on the ground floor by leaning against the door.

Deputy Public Prosecutor (DPP) Jotham Tay said that Hu then pushed Mr Lee to get him out of the way.

He added: "At the ground floor corridor outside the lift, the accused continued moving forward and threw punches at the victim's face.

"While along the corridor, the accused grabbed the victim's arms and swung him towards a wall, causing the victim's head to hit the (edge) of the wall."

The blow caused a 15cm cut on the right side of his forehead, leaving him dazed.

He was also unable to see clearly and when the police arrived, an ambulance rushed him to the National University Hospital.

The court heard that a note dated June 19, 2015, stated he would have a permanent scar on his forehead, scalp and face, with nerve damage.

On Wednesday, DPP Tay told District Judge Low Wee Ping that Hu has made a full restitution of $9,108.92 on Tuesday.

For causing grievous hurt by performing a rash act, Hu could have been jailed up to four years and fined up to $10,000.