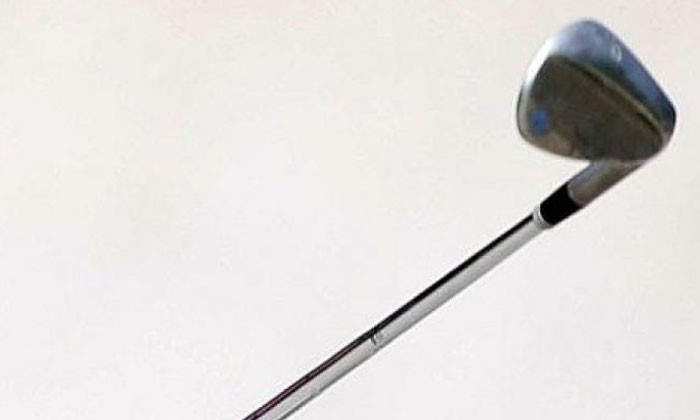 Unhappy after a group of bar patrons assaulted him, he went to look for them.

Bouncer Dominic Ignatius Rolands, now 21, who worked at Aashiyana Pub in Dunlop Street in Little India, spotted a man who he assumed was one of his attackers.

He took out a golf club, marched towards Indian national Karuppiah Ramesh, 30, and ordered him to squat before whacking him with it several times.

Court papers did not mention if the construction worker was part of the group that attacked him.

Deputy Public Prosecutor (DPP) Andre Chong said the bouncer was working at the pub at around 10.30pm on Sept 21, 2014 when a fight broke out between two groups of customers.

He intervened to stop the brawl, and the two groups stepped outside. One of the groups then assaulted him.

After the attack, he returned to his workplace and cleaned his injuries.

DPP Chong told the court that around 1am the next day, Mr Karuppiah went to a pub called Indian Queens at nearby Madras Road and left about two hours later. He later went to a Dunlop Street eating house for supper.

At around 2am, Rolands met three friends and told them what had happened and they drove around looking for the attackers.

Rolands spotted Mr Karuppiah sitting near a carpark at Kampong Kapor Road and believed he was one of his assailants.

Rolands ordered him to squat and then attacked him with the golf club.

Mr Karuppiah suffered cuts on his upper back.

Rolands will begin serving his sentence after solemnising his marriage on Dec 19. He will surrender himself at the State Courts on Dec 27.

For voluntarily causing hurt with a weapon, he could have been jailed up to seven years, fined, caned or receive any combination of such punishments.

Related Stories
Man punched friend over remark -- then bashed him up again while he was on stretcher
Air-con technician slashes man's bicep with foldable 10cm knife -- severing an artery, vein and nerve
3 Chinese students allegedly beat up Jeju restaurant worker for refusing to serve them more alcohol
assault
court
crime