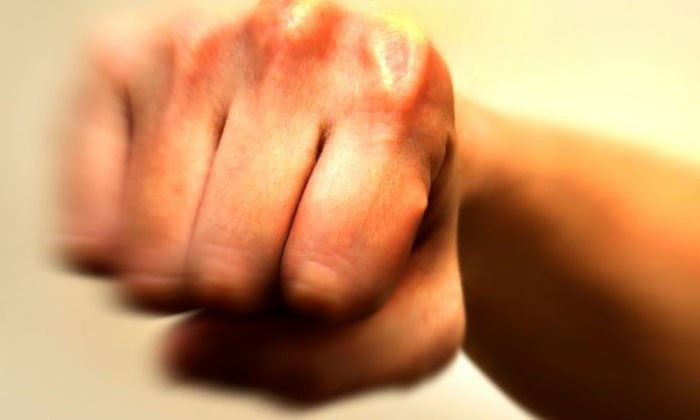 He was unhappy with his friend's comment, so he punched him in the chest and face.

Paramedics later arrived at the scene to tend to his friend, but Rajendran Vadivelu wasn't done.

As his friend lay on a stretcher, Rajendran bashed him again.

This assault took place while Ranjendran was on bail. He had punched a security guard a few months earlier.

Court papers said his violent crime spree began on Feb 26 this year as he got into an argument with a security guard, Ms Hemalatha Arumugam, at a Nex Shopping Mall food court.

Ms Hemalatha's colleague, Mr Lim Peck Leong, 63, had tried to help her, only to also get embroiled in the dispute.

Rajendran then spat at Mr Lim's face and punched him once on his left neck.

He was taken to Khoo Teck Puat Hospital with some mild tenderness on his neck and was given three days' medical leave.

Rajendran was arrested and released on bail.

On July 30, at about 1pm, he was drinking with his friend, Mr Somu Theviram, 56, at a Woodlands HDB void deck.

Rajendran got tipsy and started complaining about the housing estate.

Mr Somu told Ranjendran he could turn to his parents for help instead of asking the Government.

The comment infuriated Rajendran who threw two punches at Mr Somu's chest and left cheek, sending him tumbling to the ground.

Paramedics later arrived at the scene and they placed Mr Somu on a stretcher.

Rajendran then attacked his friend again.

The paramedics had to restrain Rajendran before one of them called the police.

"While Mr Somu was on a stretcher, you threw two more punches. How cruel," said the judge who also asked Rajendran what he was intending to do after his release.

The accused replied he would seek help for his drinking habit at the National Addictions Management Service at the Institute of Mental Health.

For each charge of voluntarily causing hurt, Rajendran could have been jailed up to two years and fined up to $5,000.

Related Stories
S'pore man gets attacked and robbed of $2,400 in Johor: 'It was the longest 10 minutes of my life'
Female SGH employee wounded with knife during robbery at Kim Tian Green in Bukit Merah
Imagine if someone did this to your mum: Elderly woman viciously slapped and beaten by man at old folks' home in Malaysia
crime
assault
court