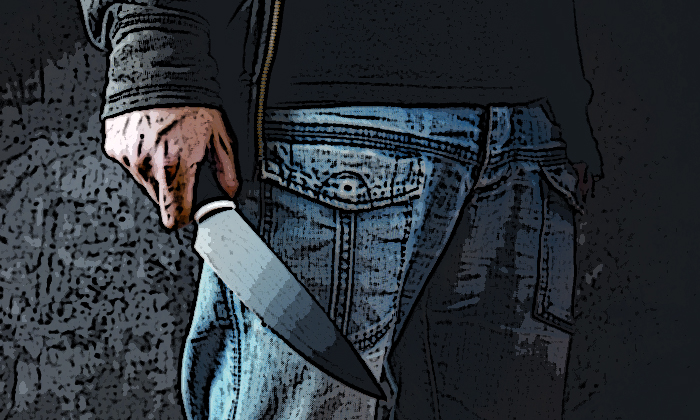 A 21-year-old air-con technician who slashed a man's biceps, severing an artery, vein and nerve, was on Thursday (Nov 3) jailed for seven months.

Sham Raaj Elansharan was also fined $4,000 for hurling vulgarities at a policeman.

He pleaded guilty to one charge each of causing hurt with a deadly weapon and using abusive words towards a public servant.

At about 4am on Jan 10, four other people - Sasikumar Selvam, 20; Pilli Sai Divyesh, 21; Mohamed Nizar Bathushaa Mohamed Hanifah, 21; and Muthukumaran Balasubramaniam, 23 - also went to the club.

The group had earlier been drinking at a pub elsewhere.

"Investigation revealed that at some point that night, Sham made some gestures towards Nizar whilst both of them were dancing on the dance floor," said Deputy Public Prosecutor (DPP) Rimplejit Kaur.

"Nizar and Sham were previously acquainted with each other and they had a dispute a few years back."

Later, the two groups left the club and Sasikumar brought out a bottle of whisky, as his group wanted to continue drinking it later.

"When Thevaraj saw Sasikumar carrying the bottle of whisky in his right hand, he became alarmed as he believed that Sasikumar wanted to use the bottle as a weapon to attack them. Thevaraj shouted Tamil vulgarities at Sasikumar," said DPP Kaur.

Nizar sought to explain the misunderstanding and told his friends that he would talk to Sham. He then left with Sham, Gautham, Thevaraj and Naethan and walked towards VivoCity.

At about 6.10am, Sasikumar, Pilli and Muthukumaran went to look for Nizar and found him standing without his shirt on and behaving aggressively at VivoCity.

The trio tried to get him to leave with them, the court heard.

"This caused a confrontation between Nizar and Sham. Sham was joined by Thevaraj and Naethan. Nizar suddenly punched Naethan before landing a second punch on Thevaraj. A scuffle broke out between the two groups."

Thevaraj then took out a foldable knife which was 10cm long, raised it to his shoulder level and said "come, come, come" to the other group in Tamil.

Sham then asked his friend for the weapon.

Clasping the knife in his right hand, Sham threw a punch at Muthukumaran, with the knowledge that he was likely to cause hurt to Muthukumaran. As a result of his act, Muthukumaran's right upper limb was slashed.

When Sham's group saw the victim bleeding profusely, they fled. Sham threw the knife in a nearby drain, before taking a taxi with his friends.

Muthukumaran was taken to hospital with a traumatic transection of his brachial artery, vein and antebrachial nerve.

He had to undergo surgery to repair his biceps muscle, and an artery and nerve. He was warded for five days and given medical leave from Jan 21 to March 12.

According to a medical report dated June 15, his nerve injury might be long lasting and he may suffer from residual numbness.

Sham was arrested at about 3pm on Jan 11 at Block 707 Yishun Avenue 5. He was charged with causing hurt on Jan 20 and released on court bail the same day.

At about 1am on May 21, a policeman spotted Sham and three friends playing carom loudly at the void deck of Block 707 Yishun Avenue 5.

The officer advised the men to keep their noise down and asked for their particulars.

Sham's screening results showed he was wanted for failing to report to the Central Manpower Base for his Individual Physical Proficiency Test.

When the policeman tried to interview Sham, he became uncooperative and shouted "your mother's c***" in Hokkien three times.

Sham was arrested for using abusive language towards a public servant in the execution of his duty.

The maximum penalty for causing hurt by means of a deadly weapon is up to seven years' jail, a fine, caning, or any combined punishment.

The maximum punishment for using abusive words towards a public servant, for a first conviction, is a fine of up to $5,000, or jail of up to 12 months, or both.