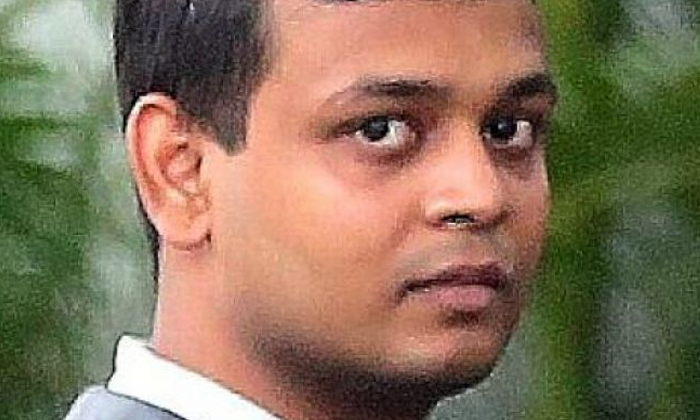 He allegedly molested his yoga student thrice in less than half an hour.

Yoga instructor Rakesh Kumar Prasad, now 24, was alone with the woman in a Real Yoga studio when he allegedly committed the offences last year.

The petite woman, now 26, took the stand on the first day of his trial yesterday.

She told District Judge Luke Tan that after she was allegedly molested, Rakesh asked her: "Why cannot touch?"

She told the court she replied: "Because you can't," as she could not think of a better answer.

According to her, Rakesh then replied: "It's not like there's anything to touch."

The Indian national is accused of outraging the assistant manager's modesty at the Tampines Grande Real Yoga outlet between 12.42pm and 1.04pm on April 26 last year.

He is also accused of using criminal force on her by forcefully grabbing the back of her neck as she was leaving the studio at around 1.15pm.

Yesterday, the woman testified that she attended Rakesh's 12.30pm class that Sunday wearing a singlet and a pair of tights.

Footage from a closed-circuit television (CCTV) camera played in court showed the pair alone in the spacious yoga studio.

Rakesh allegedly molested her for the first time at 12.42pm as she was seated on the floor with her legs stretched out in front of her.

As part of the exercise, she had to bend forward until her chest touched her thighs.

The woman said Rakesh then told her there was a gap between her chest and thighs.

He allegedly slipped his left hand, palm up, between them and told her to bend deeper.

She told the court she could feel him cupping her left breast after she did as told.

She said: "I smacked his hand away and told him, 'Don't touch my boob.'"

She added that he stopped for a while, but pinched her upper left breast soon after.

The court heard that he also told her to bend lower, otherwise he would pinch harder.

Rakesh allegedly molested her for the second time in a similar manner about five minutes later while she was in the same pose.

She testified that when she raised her voice and told him not to touch her "boobs", he replied: "Don't shout in class. Don't use the word 'boob'. It's not a nice word."

Rakesh, who is represented by lawyer Genesis Shen, allegedly molested her for the third time at 1.03pm.

Sitting on the floor with her legs spread open, she bent down until her chest touched the floor.

The woman told the court she then felt his left hand slipping into her bra and trying to cup her left breast.

She managed to knock his hand away.

Minutes later, Rakesh asked the woman why he could not touch her.

After an exchange of words, the woman said she was shocked and told him: "Don't be rude."

The class soon ended and Rakesh allegedly grabbed the back of her neck as she was walking out of the studio. The CCTV footage showed her staggering backwards.

The woman said that was the last time she went there for classes.

The woman made a police report at around 8pm the day after the lesson.

When Deputy Public Prosecutor Sharmila Sripathy-Shanaz asked her why she did not leave Rakesh's classes shortly after the alleged acts of molestation, she replied: "I was in a state of shock... I felt helpless and didn't know what to do."

During his cross-examination, Mr Shen replayed parts of the CCTV footage that showed the woman attempting to throw her towel at Rakesh and making a kicking motion at him.

The lawyer asked her if they were "friendly" gestures and she replied with a stern "no".

If convicted of outrage of modesty, Rakesh can be jailed up to two years and fined or caned or receive any combination of such punishments.

If convicted of using criminal force on the woman, he can be jailed up to three months and fined up to $1,500.

I was in a state of shock... I felt helpless and didn't know what to do.

- The woman after she was allegedly molested by Rakesh Kumar Prasad