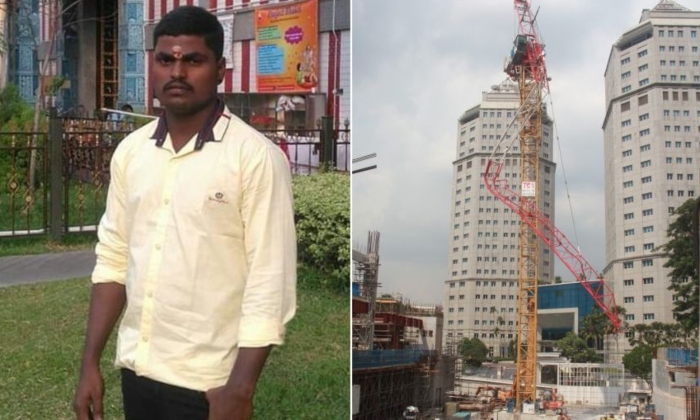 The death of a construction worker who was hit by falling material after a tower crane failed at a work site last year has been ruled a misadventure.

There is no basis to suspect foul play, said State Coroner Kamala Ponnampalam in her findings dated Dec 15.

The construction works are for an upcoming rehabilitation hub in Novena that will be part of Tan Tock Seng Hospital.

Mr Velmurugan was struck by a falling hook block from a tower crane after its horizontal beam, called a jib, buckled while lifting scaffolding material.

He was later pronounced dead by paramedics at the scene.

Another worker was injured by the chain slings of the crane and subsequently taken to the hospital.

State Coroner Kamala said in her findings that the worksite accident was caused primarily by the entanglement of the right erection rope with the frame of the crane.

Erection ropes are used to hold and balance the jib in position for it to be installed and secured onto the head of the crane frame.

But they play no further role in the function and operation of the crane after the crane's luffing system - which is used to raise or lower the jib - has been installed, according to Ministry of Manpower (MOM) reports cited by the state coroner.

State Coroner Kamala said the entanglement caused the rope to support the weight of the jib and the load which the crane was carrying.

The rope eventually broke, with the jib jerking downwards in free fall.

The hook block and load also fell towards the ground, hitting Mr Velmurugan and his colleague who were working in the vicinity.

The state coroner said the crane was not overloaded at the time of the accident.

She also noted that the MOM had identified several learning points and prevention opportunities arising from the incident, including recommending that the erection ropes be removed or disconnected and stowed away on the crane after the jib installation, if possible.

State Coroner Kamala said that the ministry had checked with industry stakeholders and was not able to find any reports of a similar incident of tower crane failure involving erection ropes across the world.

"It would appear that this was the first such incident and the entanglement of the erection ropes was an unexpected and unanticipated behaviour," she added.