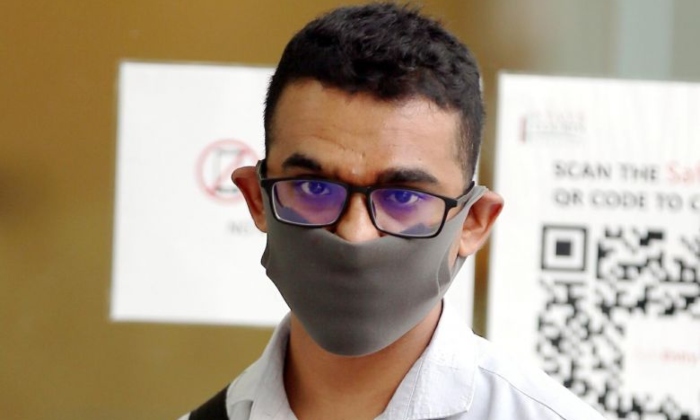 A police staff sergeant contacted a woman linked to a case involving shop theft and lied to her that her company had contacted the police about the investigation.

They met and Mahendran Selvarajoo, who worked at Clementi Police Division, drove her to a car park and told her he would help her.

He then asked her to perform a sex act on him. She complied, fearing she could lose her job.

Similarly he promised another woman, linked to a separate case of alleged credit card fraud, that he would help her. She, too, complied and they had sex while they were at another car park.

On Wednesday (Sept 23), Mahendran, 32, was sentenced to two years' jail after pleading guilty to two counts of corruption and two counts of offences under the Computer Misuse Act.

The two women cannot be named owing to a gag order from a district court and court documents did not have details about their cases.

In an earlier statement, police said Mahendran has been suspended since May 15 last year.

On Wednesday, a district court heard that he was the investigation officer (IO) of the shop theft case and that on Dec 21, 2017, the first woman had been given a stern warning in lieu of prosecution.

But Mahendran contacted her on Feb 26 last year, claiming her employer's human resource department had contacted the Singapore Police Force with queries about the investigation.

They met the following day, went to a multi-storey carpark in Block 590, Ang Mo Kio Street 51 where the woman performed a sex act on him.

Separately, the court heard that he was the initial IO of the alleged credit card fraud case, but it was later referred to another police division.

Still, he contacted the second woman on April 29 last year and asked to view her laptop when they met that evening. He saw some nude pictures of her on the computer.

He lied to her, saying he needed to take the laptop with him to "look through its contents in greater detail for the purpose of investigations".

He took it home and copied six folders with her personal photographs and videos to his personal portable storage device.

The pair met again shortly after midnight, and he told her that he could help her with the case. Fearing prosecution, she agreed to have sex with him while they were at a multi-storey carpark in Block 264, Serangoon Central.

Mahendran targeted a third woman last year when he was the IO of a separate case involving credit cards. After recording her statement in May, he asked her to hand over her laptop and mobile phone.

She told him there were some sexually explicit videos of her and her boyfriend on the phone. Mahendran left his workplace later with the devices and copied the videos to his personal stick USB flash drive.

But the Corrupt Practices Investigation Bureau (CPIB) had already been alerted to his activities on May 1 last year.

It said in a statement on Wednesday: "Recognising the seriousness and severity of this case, CPIB acted expeditiously to arrest Mahendran on the same day it received information about the offences.

"The use of digital forensics and credibility assessment tools helped uncover the extent of Mahendran's offences and his corrupt intent, including the fact that there was more than one subject from whom he had obtained sexual gratification."

Responding to queries from The Straits Times, police said on Wednesday it has begun disciplinary proceedings against Mahendran.

For each count of corruption, an offender can be jailed up to five years and fined a maximum of $100,000.