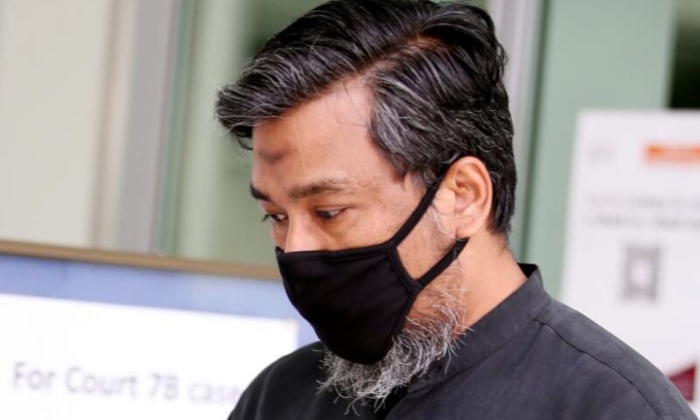 A Central Narcotics Bureau (CNB) officer has been slapped with an 18-month jail term for switching urine samples at Woodlands Checkpoint to let a suspect off the hook so that he could avoid the paperwork to charge the man with a drug offence.

Mohamed Hafiz Lan, 41, was sentenced on Monday (Aug 3) after he pleaded guilty to a charge of intentionally obstructing the course of justice.

His alleged co-conspirators, sergeant Muhammad Zuhairi Zainuri, 31, and Abdul Rahman Kadir, a 43-year-old staff sergeant, have been charged with the same offence, and will be dealt with at a later date.

It was earlier reported that all three officers had been suspended since July 2019.

The trio were working at Woodlands Checkpoint late at night on Aug 15, 2018, when they encountered Maung Moe Min Oo, a 32-year-old Singaporean, who was with 26-year-old female Thai national Wattansong Sakawuduean. The two were referred to them for further drug testing as a swab test showed that Maung and Wattansong could have consumed drugs.

Subsequent investigations have since revealed that Maung had indeed taken drugs prior to attempting to enter Singapore.

Knowing that he was unlikely to pass the urine test, Maung not only declined to give a urine sample, but also asked to speak privately with the officers and sought leniency from them.

As Maung was not cooperating with the procedures, the trio allegedly hatched a plan in the wee hours of the morning on Aug 16, 2018, to "give (Maung) a second chance" - by switching his urine sample with one of their own so that the man could pass the drug test.

The court heard that the officers did so because they knew the process to get a sample from Maung could take some time, and that switching his urine sample with a clean sample could expedite the processing of his departure from the CNB office with no further action on their part.

There are detailed and strict procedures in place for the administering of urine tests, and CNB officers must verify that the sample is indeed that of the suspect's.

In this case, Mohamed Hafiz followed none of these procedures. He instead headed to one of the toilets at Woodlands checkpoint where he collected his own urine sample and concealed the bottle behind a dustbin in one of the cubicles.

When Mohamed Hafiz brought Maung to the toilet on the pretext of collecting his urine sample, he informed Maung exactly which cubicle to enter and where to find the clean urine sample. He also gave Maung detailed instructions on what to do in order to pass the sample off as his own.

Maung followed these instructions and passed the drug test, and was allowed to enter Singapore. He later left Singapore with the Thai national, whose urine sample also tested negative.

The misdeeds came to light when Maung tried to enter Singapore the next day (Aug 17, 2018) and was detained again for suspected drug consumption by a different CNB team. Maung then revealed to this team that CNB officers had helped him pass his instant urine test the previous night.

A review of CCTV footage later revealed that the officers could have tampered with Maung's urine sample, and the matter was referred to the Corrupt Practices Investigation Bureau (CPIB).

Deputy Public Prosecutors Navin Naidu and Thiagesh Sukumaran said that a heavier sentence was warranted, citing the extensive planning and premeditation that went into committing the offence.

The prosecutors also asked for a deterrent sentence to reflect the gravity of the offence, as this "serious obstruction of justice" was committed by Mohamed Hafiz in his course of duty as a law enforcement officer.

"When a law enforcement officer commits an offence in the course of his duties, an uplift in sentence is imposed irrespective of the offender's motive, be it financial gain or plain laziness," said DPP Naidu, adding that the offence committed by Mohamed Hafiz also infringes Singapore's strict zero-tolerance policy towards drug offences.