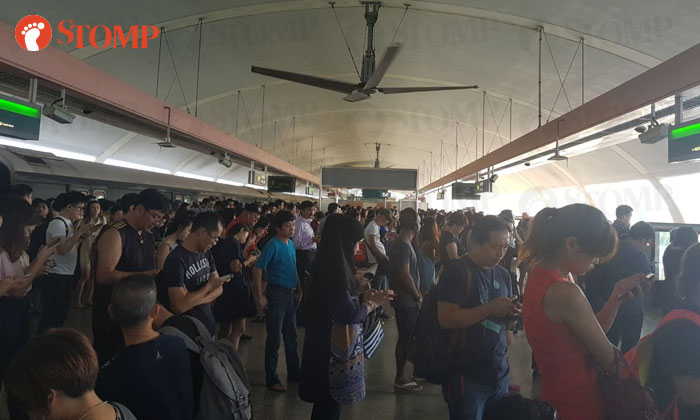 Several Stompers reported being affected by a delay on the East-West Line this morning (Oct 24).

This writer was at Pasir Ris MRT Station at around 8.45am when she saw that the lines of people waiting for the train were longer than usual.

One train at Platform A was full of commuters who were then told to exit the train, causing the platform to be overrun with people.

An announcement was made informing those waiting that there was a "signalling fault" and asking them to add 10 minutes to their travelling time.

Stomper Krishan also told Stomp that he waited for 10 minutes at Tampines station for a train heading towards the city.

He added that the platform at that station was full as well.

Stomper Steve reported that the train he was in "waited three to five minutes at every station."

Stompers also expressed frustration that there was no official response on SMRT's social media when the incident happened.

"There was no announcement on Twitter or on the transport app," said Krishan.

As of 11.30am, SMRT has not posted any updates on the delay.

“At about 8.30am today (Oct 24, 2017), the East-West Line encountered a software fault on the legacy signalling system. The fault was rectified in around 10 minutes, but the EWL experienced some train traffic congestion during the morning peak because trains had to move at slower speeds for safety reasons when the fault occurred. As such, commuters may have encountered delays to their journey this morning. Station and train announcements were made informing commuters of the fault and to add an additional train travel time of 10 minutes. Normal services resumed at 9.00am. We apologise for the inconvenience caused to affected commuters on their peak hour commute."