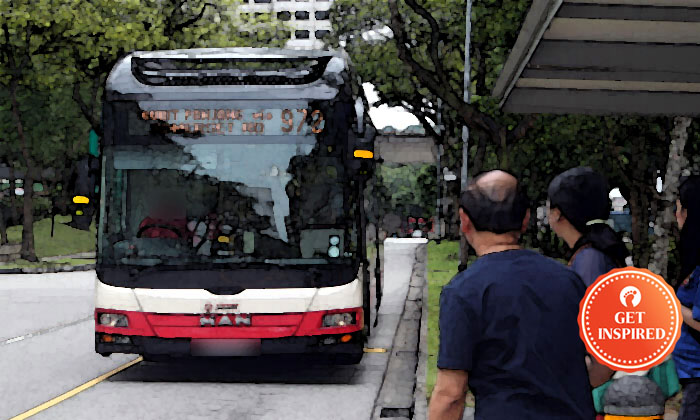 Commuters were impressed by a bus driver of bus service 972 announcing landmarks and block numbers in Bukit Panjang aloud, to inform them where the bus was headed.

Stomper Mdm Lee boarded the bus at a bus stop along Bukit Panjang Road at about 12.30pm yesterday (Oct 23), when she noticed the bus driver talking continuously.

At first, she didn't know what he was saying, but when she listened closely she realised he was telling the passengers of the landmarks nearby.

In the audio recording she sent Stomp, the bus driver told his passengers when he was coming to Segar Road.

He said: "We are now passing Segar Road.

He continued by announcing the police station the bus would have been approaching.

Mdm Lee said: "I think that the bus driver should be complimented. It is impressive to see someone going the extra mile for the passengers."

Aside from what is heard in the audio clip, Mdm Lee said that the driver pointed out a temple and shopping centre that the bus would have been passing by.

Related Stories
Yishun resident gets Stomp Goody Bag for promoting kampung spirit with free food delivery service
Biker who stopped to direct traffic gets Goody Bag: "When I saw it on Stomp, I knew it was a big deal"
Man shares how he felt "true happiness" when helping injured uncle at Circuit Road Food Centre
More About:
kind
bus driver
kind acts
kudos