Biker who stopped to direct traffic gets Goody Bag: "When I saw it on Stomp, I knew it was a big deal" 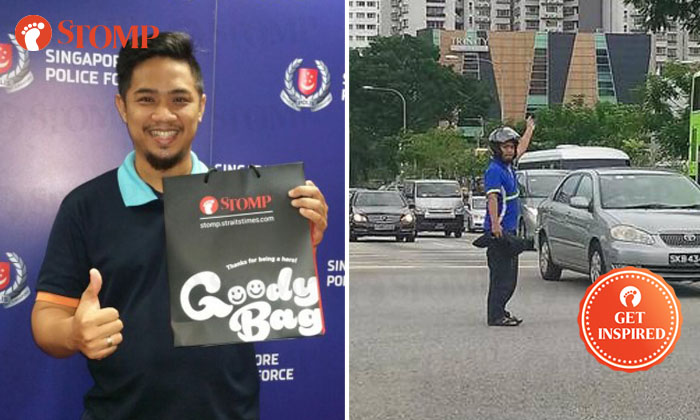 Sukarno Bin Arsad, 33, helped to direct traffic on Oct 11 at about 6.15pm when the traffic lights at the junction of Macpherson Road and Paya Lebar Road were faulty.

He was commended for his public-spiritedness in a ceremony held at the Traffic Police (TP) Headquarters on Oct 19.

Stomp also presented Mr Sukarno with a Stomp Goody Bag at the ceremony.

The Stomp Goody Bag is awarded to everyday heroes who are 'Stomped' for performing random acts of kindness, to encourage civic-mindedness in the community.

Stomp picked up the story and found out more about the incident.

Mr Sukarno, a warehouse assistant, was on the way home to Punggol from his workplace at Kallang Pudding Road when he came across the faulty lights.

He was on his motorcycle and noticed that there was a jam and decided to park his bike by the road and direct traffic.

He said: “I don’t know how I had the courage to do it. I just decided to use my initiative and help.

“I was shocked that people listened to me.”

Mr Sukarno said that he served in the Singapore Police Force for his National Service and put the road safety training he was given at that time to good use in this situation.

“I started becoming scared after directing the roads for five minutes, but I continued for everyone’s good.

"People who passed by gave me a thumbs up and some were concerned about my safety and advised me to be careful from their cars."

Ten minutes into directing traffic, he said he saw a police car and thought that the authorities were alerted to the faulty traffic lights, which was why he did not call the police.

As soon as he got on his motorcycle and was riding off, he realised the lights were becoming faulty again.

He made a U-turn back to the same location and continued directing traffic.

This time he had the assistance of two men.

One of them had a whistle, which Sukarno said helped him a lot because his voice was tired from shouting instructions to the motorists.

The other man called the police while Mr Sukarno was directing traffic.

In about ten minutes, the police arrived and Mr Sukarno continued on his way home.

He arrived home to a home-cooked meal by his wife after his tiring day.

He told Stomp: "When I reached home, my wife asked me why I took so long. I told her I was directing traffic and she kept asking me why and what happened.

"That night after telling her the whole story, she saw LiTing TaRa's post on Facebook and was impressed by my act.

"My wife immediately messaged LiTing on Facebook and thanked her for expressing her gratitude to me."

On that day, Mr Sukarno's manager also heard about the incident and called him asking him about it.

Mr Sukarno also received messages from many people, including old friends who he had not spoken to for a long time, asking him about what he did.

Commander of Traffic Police, Senior Assistant Commissioner (SAC), Gerald Lim said: "TP is encouraged to see motorists like Mr Sukarno displaying initiative and stepping up to ensure road safety for others in times of need."

At the ceremony, SAC Gerald also said that Sukarno was not only aware of the safety of others, but his own safety.

He was wearing a black jacket and a shirt with blue stripes and his motorcycle helmet.

In order to attract more attention, he took off his jacket to reveal the blue shirt, and used the jacket to direct traffic.

He also did not remove his helmet which allowed him to be safer.

The next day, Mr Sukarno's friend Fazli showed him Stomp's article published the next morning on his good deed.

When asked how Mr Sukarno felt about seeing himself online, he said: "When I saw it on Facebook it made me feel happy. But when I saw it on Stomp, I knew it was a big deal and I was very grateful."

He was presented with the Stomp Goody Bag and said: "I truly did not expect any of this. I believe that if we do good, God will repay us for our deeds.

"Anything else received is a bonus. I am grateful to Stomp for recognising me and I hope this encourages others to use their initiative and skills to help wherever they can."

Stomp presented Mr Sukarno Bin Arsad with a 'Goody Bag' for being an inspiration, as part of our efforts to recognise everyday heroes and highlight heartwarming deeds.