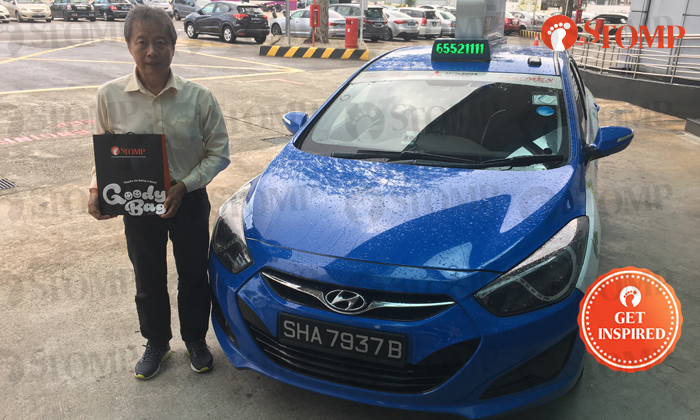 Upon realising that a passenger had left behind her phone on his taxi, a ComfortDelGro cabby was faced with two choices.

He could either leave it at his company's Lost & Found department, or locate the passenger on his own and return the phone to her personally.

And despite living in an era where time is money, Mr Yeo Bak Khim had no qualms picking the latter option even though it meant a loss of income and would also require much more effort.

The 56-year-old cabby was earlier praised by Ms Fauzella Sahabdin for going door-to-door to return her handphone -- an act which she described as 'saving her life'.

Ms Fauzella had boarded Mr Yeo's taxi on the afternoon of March 31, from Choa Chu Kang Central to her mother's house at Teck Whye Lane.

She did not notice that she had dropped her phone on the cab until Mr Yeo showed up in front of her about an hour later.

Ms Fauzella, a self-employed henna artist, told Stomp that her phone contained important information about her clients and appointments all the way till 2019, which made Mr Yeo's gesture all the more priceless.

In an interview with Stomp, Mr Yeo, who has been a ComfortDelGro driver for 11 years, shared why he chose to go the extra mile for a stranger.

He said: "It was a Saturday, so if I wanted to return the phone to ComfortDelGro's office, I would have to wait till Monday.

"That meant that the passenger would probably only get her phone back on Tuesday.

"I'm not sure how important the phone is to her, but anything could happen in those few days. Moreover, we live in a digital age and she might have a lot of data saved in her phone."

As such, Mr Yeo chose to act.

Never mind that he had to turn down picking up another passenger in order to return to Teck Whye Lane.

Fortunately, the passenger was understanding when Mr Yeo, who typically works from 5am to 5pm every day, explained his predicament and readily agreed to find another cab.

When Mr Yeo arrived at the Teck Whye Lane block, he waited at the void deck for over 20 minutes in hopes that Ms Fauzella would be looking for him.

However, nobody turned up as Ms Fauzella had yet to realise her phone was missing.

Still, he remained undaunted and decided that he would look for her instead.

"I wanted to try my best to return the phone back into her hands," Mr Yeo told Stomp.

"My target was clear: It was the whole block of flats. I could definitely find her.

"I decided to go door to door because I believed the chances of finding her was very high.

"I estimated that I would only need an hour to solve this problem, as compared to her waiting till next week to get her phone back."

Mr Yeo then studied the layout of the HDB block and the location of its lift, prompting him to start his search on the third storey.

By some inexplicable stroke of luck, the first unit that Mr Yeo came across on the third floor already had its door open -- and that was exactly where he found Ms Fauzella.

He added: "It wasn't that tough for me and I told her that I was just 'trying my luck'.

"The problem was easily solved. Otherwise, I would need to knock on every door -- and I would have really done it."

Asked how he felt about being recognised for his kind deed, a humble Mr Yeo maintains that any of his peers would have done the same.

"It's something that all my colleagues do on a daily basis. Those at the Lost & Found Department are always very busy.

"I'm actually not that different from them, it's just that nobody has commended them.

Stomp presented Mr Yeo with a Stomp Goody Bag as part of our efforts to recognise everyday heroes and highlight heartwarming deeds.

Know someone who deserves a 'Goody Bag' or had a memorable encounter? Share your story with us at stomp@stomp.com.sg or WhatsApp (+65) 9384 3761.