Cabby who gave passenger 'crybaby moment' gets Stomp Goody Bag, shares the highs and lows of his job 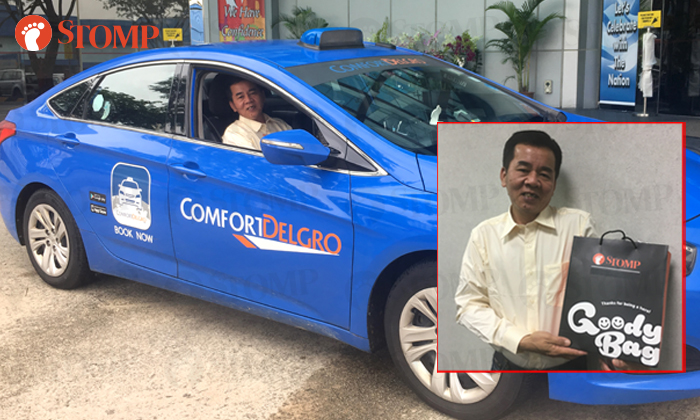 Besides long hours behind the wheel, bad traffic and stiff competition, taxi drivers also have to deal with difficult passengers.

From fare evaders to aggressive drunks, ComfortDelGro cabby Mr Yeo Choon Hwa has encountered them all, having been in the industry for nine years.

Yet it only takes something as simple as a passenger saying 'thank you' or wishing him well to make his day -- and the not-so-enjoyable parts of his job worth it.

The 51-year-old was pleasantly surprised when he learnt that Ms Noor Mastura, a passenger and air stewardess whom he had driven to Changi Airport on July 5, had commended him online.

In her Facebook post, Ms Mastura recounted how she was only 12 minutes away from the destination when she realised that she had forgotten her wallet.

"There was no way out. Turning back will mean a day of havoc for me," said Ms Mastura, who had to report for a flight at 7.30am.

Mr Yeo simply smiled kindly and then readily agreed to his passenger's suggestion of transferring him the fare later that day -- but that was not all that he did.

Ms Mastura, whose post was featured on Stomp where it garnered almost 10,000 views, added, "Uncle even came out and helped me with my bags and just before I dashed off - he asked me if I had enough money for my travels and if I needed some.

"Yeah. Crybaby moment for me. Still is."

For his extraordinary service and kind efforts, Mr Yeo received a Thumbs Up Award, a certificate and monetary incentives from his company.

Stomp also visited him at the ComfortDelGro office on July 13 to present him with a Goody Bag.

During an exclusive interview, Mr Yeo revealed how this was not the first time he had picked up a passenger who did not carry money and requested to pay later.

Asked why he places so much trust in his passengers, he said, "It is my responsibility to send them to their destinations as I am providing a service. If they do end up not paying me, then I just treat it as doing charity."

For Mr Yeo, it is all about doing his job to the best of his ability.

He added, "The challenge is getting my passengers to their destinations. Sometimes they are in a rush. I tell them I will try my best to meet their requests and complete my task."

Stomp even got a first-hand experience of Mr Yeo's kindness and warmth when he sent us back to our office at Singapore Press Holdings, located just five minutes away from ComfortDelGro.

We made sure to thank him and wish him a nice day.